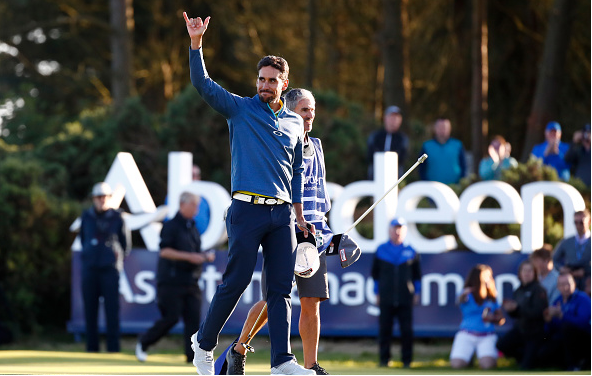 Spain’s Rafael Cabrera Bello posted a course-record 8-under 64 on Sunday, and edged England’s Callum Shinkwin in a playoff to win the 2017 Scottish Open at Dundonald Links.

Shinkwin appeared to be a lock to win his first European Tour title, but the 24-year-old muffed his chip shot on 18, and then left a 4-foot par-putt about two inches short.

It was Shinkwin’s only bogey of the day, and left him tied with the 33-year-old Spaniard at 13-under.

In the first playoff hole, Cabrera Bello hit a near-perfect approach to the par-5 18th, and two-putted for a birdie 4. Shinkwin had a chance to push the hole, but left his birdie putt just short, once again.

“I was very happy, I really gave it a go in the playoff and it worked out for me. I enjoy those pressure situations, they really define you,” said Cabrera-Bello.

The win is the third for Cabrera-Bello, and his first since 2012. Along with the trophy, and momentum heading into Royal Birkdale, the Spaniard took home a $1.1 million first place prize.

It was not a total loss for Shinkwin, as the runner-up finish secured a spot in next week’s British Open.

France’s Mattieu Pavon (66), who finished alone in third at 10-under, and Australia’s Andrew Dodt (73), who tied for fourth at 8-under, were the other two players to capture the Open invites.

Four others tied Dodt at 8-under, headlined by Ireland’s Padraig Harrington, who had a nice bounce-back round of 66 on Sunday, and American Matt Kuchar (69).

England’s Ian Poulter, who shared the overnight lead, struggled to a 74 and dropped to 7-under alongside a group of five others, including American Rickie Fowler (70).

Northern Ireland’s Graeme McDowell (72) finished at 5-under and will miss the British Open for the first time in his career.

"I played some of the best golf of my life today." pic.twitter.com/9xgnjQdPnB

Cabrera Bello with an absolute rope on his approach shot to the green in OT, setting up a two-putt for birdie, and the win.

“Today I had that little bit of luck I needed. Obviously I did everything I needed to do well. I stayed patient – one shot at a time, and I putted good. I really trusted myself… I really played the best golf of my life.”
–Rafael Cabrera Bello, Winner, 2017 Scottish Open