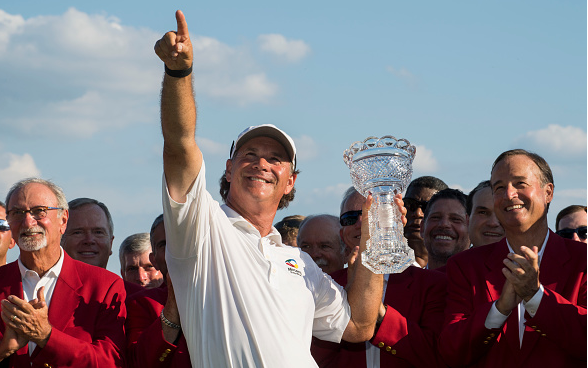 Scott McCarron fired a 6-under 66 on Sunday at Caves Valley Golf Club and then watched as leader Bernhard Langer missed two short putts down the stretch to give McCarron the major championship.

With two holes to go, Langer needed only a par-par finish to capture his fourth consecutive Senior PLAYERS title. But the 59-year-old German ran out of gas, and carded a double-bogey 5 on the par-3 17th, and then lipped out a short birdie putt on 18 to finish at 1-over 73, one back of McCarron at 17-under.

Langer and Brandt Jobe started the day in what looked to be a match play for the championship, as the pair had a half-dozen shot lead over the rest of the field. But both players struggled, allowing the field to catch up, particularly McCarron and Miguel Jiminez, who also carded a 66 to move up to solo-fourth at 16-under.

For McCarron, it’s his second win of the season, and first major as a professional. Afterwards, the 51-year-old dedicated the victory to his caddie’s father, who recently passed away.

“My caddie, Rich Mayo, his father passed away on Wednesday, Bud Mayo. So Bud this one’s for you my friend,” said an emotional McCarron, as he turned to the camera. “We miss him. He used to love watching Rich and I… So this was really special”

The win earned McCarron $420,000, which moved him into second place in the Schwab Cup race, trailing on Langer.

“To win my first major, out here on the Champions Tour, it just feels so good.”
–Scott McCarron, 2017 Constellation Senior PLAYERS Champion