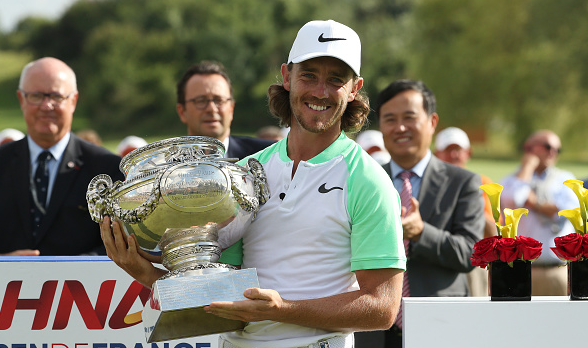 The weekend is over, and four new winners were crowned on the four major professional golf tours.

On the PGA Tour, Kyle Stanley won for the second time in his career, but first time in five years, at the Quicken Loans National. Kenny Perry took home the U.S. Senior Open title on the Champions Tour at Salem Country Club.

And finally over in France, on the European Tour, Tommy Fleetwood’s career continues to soar. The Englishman, who introduced himself to American golf fans at Erin Hills, won the French Open.

Now onto the rankings.

This wasn’t even really debatable. The KPMG Women’s PGA trophy is by far this weekend’s top trophy. It’s clean lines, sterling silver shine, and Stanley Cup features make it one of the best trophies in all of golf.

As Kang said, “This trophy is really heavy. I’m really happy. This trophy, I won a big one, too. Big and heavy. It’s a sturdy little guy.”

While a bit on the small side, the trophy is a facsimile of the Capitol Building in Washington DC. And it’s the only trophy whose design can be traced back to President George Washington, so there you go. Happy Birthday America!

The US Senior Open trophy looks similar to the U.S. Open Trophy if you broke off its top and bottom. Maybe someone at the USGA tripped when carrying it and instead of throwing it away they decided to give it to the winner of its senior championship. Perry’s face says, “Where’s the rest of it.”

The only reason it’s not dead last on our list is because it’s the fourth of July, and it’d be a mortal sin to place France ahead of the U.S. of A.

The trophy for the France De Open, or the French Open, is classic old European architecture – big, gaudy, and just plain ugly. Americans bailed the French out of military failure after military failure, so maybe some based American can bail them out of this trophy fail.