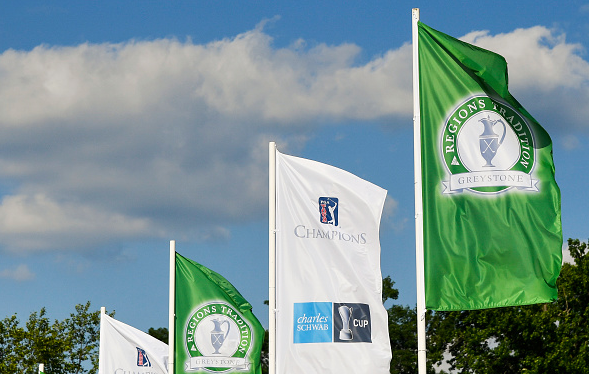 The first major of the PGA Tour Champions 2016-17 season is upon us, with the 29th-annual Regions Tradition. For the second year in a row, the tournament will be hosted at Greystone Golf & Country Club.

Featuring eight of the top-11 players from last year’s final leaderboard, the 79-player field is loaded with the tour’s biggest stars, including defending champion Bernhard Langer and John Daly, who makes his first start since his breakthrough win at the Insperity Invitational.

All times are Central

A weak weather disturbance will cross Alabama on Thursday to produce a few showers and storms, mainly during the afternoon/early evening hours. The ridge of high pressure regains some strength Friday to keep us dry, but another system will approach the region from the northwest this weekend, bring the likelihood of rain and storms late Saturday through Sunday.
(Forecast prepared by on-site meteorologist Willis Young.)

Bernhard Langer posted four rounds in the 60s and cruised to a 17-under-par finish – six strokes clear of runner-up Olin Browne. For the week at Greystone, Langer recorded one eagle and 19 birdies against just four bogeys. The then 58-year-old, and four-time Charles Schwab Cup winner, hit 90% of his fairways (47 of 52) en route to his victory.

The win at the Traditions was Langer’s sixth major championship title on the PGA Tour Champions (he added number seven at the Constellation SENIOR PLAYERS Championship later in the year).

Storyline 1: The First of Five Majors

Starting this week in Alabama, five of the next seven tournaments are major championships on PGA TOUR Champions.

John Daly will be making his first start since he captured his first PGA Tour Champions victory at the Insperity Invitational. The win came in Daly’s 22nd start on Tour, and he earned $322,500 to move from No. 42 to No. 8 in the Charles Schwab Cup standings. He has carded five consecutive rounds under-par (67.60 average) and has three straight top-15 finishes.

Last year, Daly finished tied for 15th in his debut at the Regions Tradition. Before the win, the last time Daly won a PGA TOUR-sanctioned event was the 2004 Buick Invitational, a span of 13 years, 2 months and 22 days. He is now the 12th player with victories on the Web.com Tour, PGA Tour and PGA Tour Champions.

For Sutherland, it was his ninth straight top-10, dating back to the final two events of last season. He now has 30 top-10s in 62 starts, though he has yet to claim victory. On the season, he leads the Tour in Greens in Regulation (78.09%) and is third in scoring average (68.50).

Jimenez’s streak is now at five straight top-10s, and this stretch includes his fourth career victory at the Mississippi Gulf Resort Classic. He has carded 19 consecutive rounds under-par and he has the fourth-best scoring average on Tour this season (68.59). He is rated as the Tour’s best overall driver, as he is 13th in driving distance (288.5 yards) and 12th in driving accuracy (78.15%).

79 Players in the Field