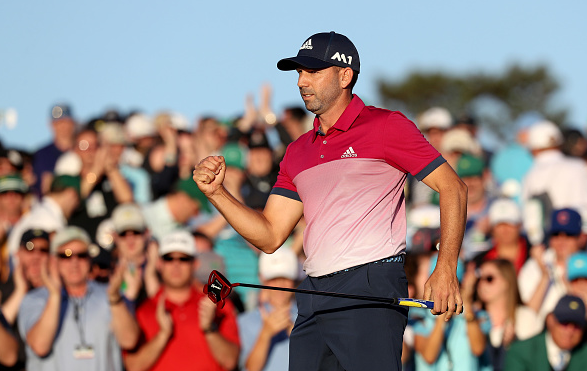 After two treacherous days at Augusta in high winds, those who were able to withstand the elements were rewarded with a beautiful Saturday.

Augusta National still played tough, but there were many more red numbers posted on Saturday, especially compared to Thursday.

The big mover of the day was 2013 U.S. Open champion and 2016 Olympic Gold Medalist Justin Rose, who carved up the back nine to the tune of a 5-under 67, the low round of Saturday and the second-lowest round of the tournament.

The low round moved Rose to the top of the leaderboard at 6-under, tied with 36-hole co-leader Sergio Garcia, a name ubiquitous in discussions about the best players without a major win.

Eight other golfers are within five strokes of the Rose-Garcia duo, including Rickie Fowler who’s just one stroke back at 5-under-par.

Lurking two strokes back is the name that likely induces the most fear into the field: Jordan Spieth. After a third round 68, Spieth, who has finished in the top-2 of the last three Masters, including his 2015 victory, will be paired with Fowler in Sunday’s penultimate group – a group guaranteed to draw an incredible amount of attention.

Justin Rose was relatively quiet for two and a half rounds, starting 71-72 and playing his third-round front-nine to even par.

That is when Rose decided to make his presence known. He suddenly exploded into contention with a brilliant back nine where he had birdies on 12, 13, 15, 17, and 18, leading to the five-under 67.

Like Rose, Sergio Garcia also escaped the front nine with two birdies and two bogeys. And like Rose, he was bogey-free on the back nine, with birdies on the two par 5’s, 13 and 15.

Sergio has been famously major-free in his 18-year career, but has given himself his best chance in a long time. His previous high finish at The Masters was a T4 in 2004.

Lee Westwood was one of just three players under par after the wind-dominated first round, but was thought to have played himself out of a chance for his first major with a second-round 77.

Westwood, who has finished in the top-3 on three occasions in the last seven years, turned his fortunes back around on Saturday, carding birdies on three consecutive holes on the front nine (4, 5, and 6) and then three more birdies over his last six holes to shoot a four-under 68. Westwood is -1 for the tournament.

Matching Westwood’s 68 was 2011 Masters Champion Charl Schwartzel. The South African eagled the par-5 15th, and with just one bogey, he got to -2 for the tournament.

Jordan Spieth, a Masters leaderboard fixture is in contention for the fourth time in four tries after he, too, shot a 4-under 68. Spieth moved up considerably after birdies on 6, 8, and 9, and kept the good form on the back, nearly carding an eagle on the par-5 5th hole that he quadruple-bogeyed on Thursday.

Last year’s runner-up, Spieth is now just two back of the lead.

After birdies on the first two holes, Phil Mickelson looked to be in prime position to challenge for his fourth green jacket. The rest of his front nine, however, was a disaster, as he dropped five shots before the turn.

&nbsp
A back nine which comprised of 8 pars and a birdie was good, but not good enough to undue what had happened from holes 3-9. He finished the day with a two-over 74, and is at +2 for the tournament, eight strokes behind Rose and Garcia.

Hideki Matsuyama, a winner of two events already this season, rebounded from an opening-round 76 with a second-round 70, but was likely done in with a 3-over front nine.

The Japanese star had gotten those three strokes back, but a double-bogey on 18 led to a finish of 2-over 74. The 24-year-old is now 4-over for the week.

Masters first-timer Thomas Pieters, a young Belgian star and 36-hole co-leader, has been as up and down as anyone in the field, reaching 5-under at one point on Thursday, but also enduring several down stretches.

Pieters was more down than up on Saturday, with four bogeys and a double. He finished the day with a 3-over 75, and dropped to -1 for the tournament, but still just five strokes out of the lead.

“Jordan obviously has a special relationship with the Masters, he’s going to feel great about his chances tomorrow. Rickie’s a very confident player; he’s going to be searching for his first major championship, he’s gonna be all-up for it tomorrow. Sergio’s gonna have a great opportunity tomorrow. There are wonderful storylines. Obviously, I’m a major champion, and I’m looking for more, and I’m certainly looking for my first Masters and my first green jacket, and this is a place I dearly love and would love to be a part of the history here.” ~ Justin Rose, 54-hole co-leader