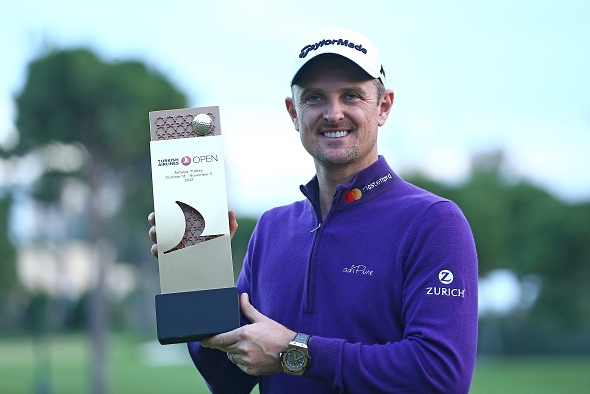 Justin Rose capped off another fantastic week of golf with a birdie on the 72nd hole to reach 18-under par and capture the Turkish Airlines Open by a single stroke. 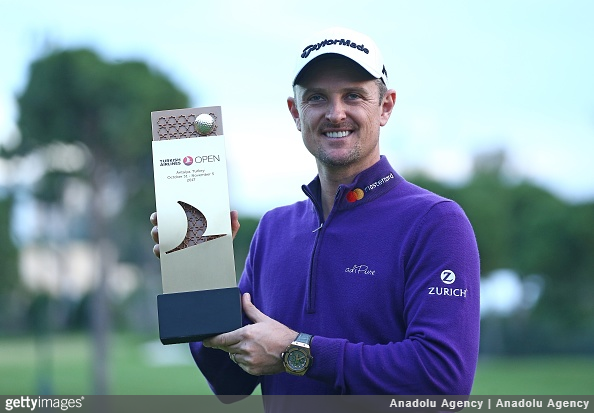 Playing in the second to last group, the Englishman and his playing partner, Nicolas Colsaerts of Belgium, were deadlocked with South African Dylan Frittelli at 17 under.

Both golfers hit perfect approaches to eight feet on the par-4 18th, but it was Rose, last week’s WGC-HSBC champion, who made the tournament-winning birdie putt.

“Today was a different type of win — they’re all different in their own way. But to hole a putt – not that I’ve won a ton of golf tournaments, but the tournaments that I have won, have been with two putts on the last green. You know I’ve done all the hard work and just finished it out,” said Rose, who will move to No. 5 in the world rankings on Monday. “That was a bit of a unique one for me — to be able to make a putt that really counted on the last hole. Very happy with the way I was able to close it out.”

The Olympic Gold Medalist finished with a final-round 6-under 65 at Regnum Carya Golf & Spa Resort to make it back-to-back wins, and to leapfrog Sergio Garcia into second place in the Race to Dubai Rankings – just 134,839 points behind leader Tommy Fleetwood.

Frittelli, who began the day five off the lead, dropped three chip-in birdies on the front en route to a 7-under 64, and T2 finish alongside Colsaerts at 17 under.

“I had two chip-ins yesterday. I don’t know, something’s clicking right in my short game,” said Frittelli, describing his sudden chip-in prowess. “I felt really confident over all of those chips. I’m glad they got me in contention today and seemed to play pretty well under pressure.”

Colsaerts also had a terrific final day, matching the world-class Rose shot for shot, right up until the final stroke for a 5-under 66. 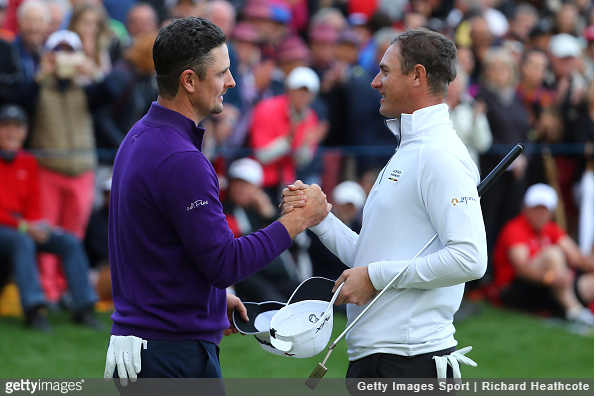 “Obviously the finish was great. It’s been a while to be able to almost close it and in such a fashion,” said Colsaerts, 34. “I guess there’s a lot of positives to take out of it. It’s great for the confidence of course. I’m going to play those last two events, trying to squeeze out of these tournaments as much as I can.”

Padraig Harrington (67) posted his third sub-70 round in Turkey to finish solo four at 16 under. The three-time major champ’s final day was highlighted by a par-saving hole-out over water on the par-4 10th along with an eagle on the par-5 15th, which briefly moved him into a tie for the lead with Rose.

“I’m very happy leaving. I know I didn’t win the tournament but Justin obviously clearly went ahead and won it. I didn’t lose it,” said Harrington, who played on a sponsor invite. “I made it quite exciting at times out there but I was happy with what I saw in myself.”

Defending champion Thorbjørn Olesen signed for a 5-under 66 to claim solo fifth at 15 under.

“I felt like I played better and better each day. Obviously I wanted to keep going. It’s been a great week, feel like I’ve been playing some good golf. Hopefully I can finish strong and see if I can get that victory I haven’t got this year,” said Olesen.

The 54-hole co-leaders, Aphibarnrat and Lowry, struggled for much of Sunday, finishing T6 and T8, respectively.

THE RISE OF ROSE

SHOT(S) OF THE DAY

Rose’s approach and putt on 18 to win!

“It’s like a bus. You wait for ages for one and then two turn up.”
–Justin Rose, 2017 Turkish Airlines Open champion