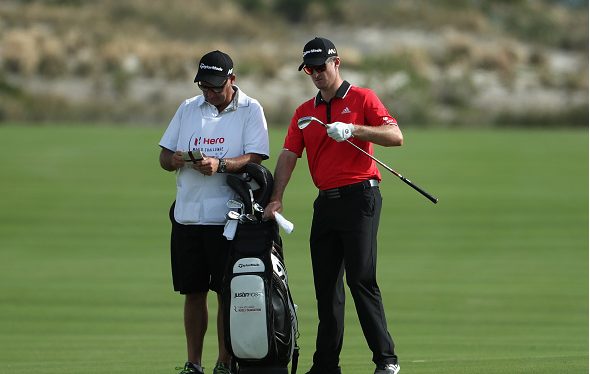 The opening round of the Hero World Challenge is wrapped up with J.B. Holmes leading at 8-under-par. The stacked 18-player field saw 16 players at level-par or better, but the story of the day was the return of Tiger Woods (+1, 73) after a 16 month layoff.

One of the hottest players in the world, Hideki Matsuyama, is one shot back of Holmes after opening with a 7-under 65. The PGA Tour’s reigning POY, Dustin Johnson, is two shots back following an opening round 66.

Rounding out the top five are Henrik Stenson, Matt Kuchar and Louis Oosthuizen who all carded 5-under 67s.

The aforementioned J.B. Holmes, one of the USA Ryder Cup Captain’s picks, turned a rocky start into the round of the day. After bogeying the opening hole, Holmes made four birdies on the front, three birdies and an eagle on the back. Holmes played his final 17 holes in 9-under-par.

The long hitting Holmes took advantage of the five par-5s by playing them in 5-under.

Olympic Gold Medalist, Justin Rose, did not get off to the start he would’ve liked to with such a loaded field. Rose made three birdies, three bogeys and three pars on the front nine.

Unfortunately, Rose couldn’t get anything going on the back nine after playing his closing nine in 2-over par to card a 74.

With the return of the one-and-only Tiger Woods, it would only be fitting that he finds the highlight of the day. The former number one player in the world was tied for the lead at 4-under after 8 holes, thanks to his near ace at the par-3 8th.

Tiger knew it was a beauty right when he struck it, saying “gimme one more yard.” And sure enough, knocked it to within two feet.

Tiger definitely showed signs of improvement even though his back nine 40 lead him to 1-over for the day.