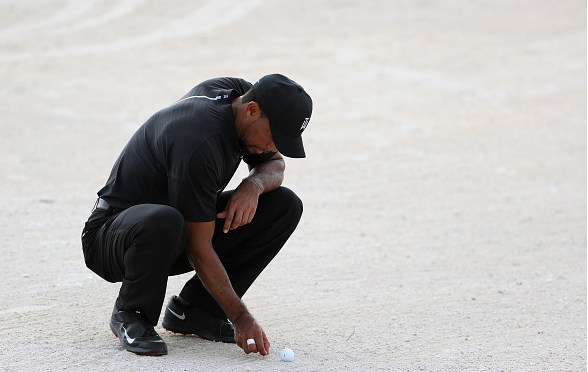 Round two of the Hero World Challenge is on tap in a couple of hours. The 2016 version of the Bahamas based event is setting up to be a barn-burner – with 8 players all within 4 shots of the lead.

J.B. Holmes leads the star-studded field at 8-under while rising (super)star Hideki Matsuyama is one back at -7 – and one ahead of Dustin Johnson who is at 6-under.

Players such as Henrik Stenson, Matt Kuchar, Rickie Fowler, and Jordan Spieth are all within striking distance, and only a few shots out of the lead.

Before we move on to the next round, let’s take a look at the 10 best photos from day one from the photographers at Getty Images.

A range volunteer applies Tiger Woods name on a sign on the driving range before the first round.

Stenson stikes his approach shot on the first hole at Albany.

3. Tiger Woods In The Sand

Tiger evaluates his golf ball in the sand trap on the 13th hole.

Rose tees off on the 10th hole.

5. Tiger With Some Body English

Woods gives it some body english after a shot on the 13th hole.

Reed putts on the 13th green during round one.

7. All Eyes On Tiger

Tiger plays his second shot on the first hole.

Fowler hits his second shot on the first hole.

Zach hits it out of the bunker on the ninth hole.

Tiger takes a drop on the 18th and final hole.