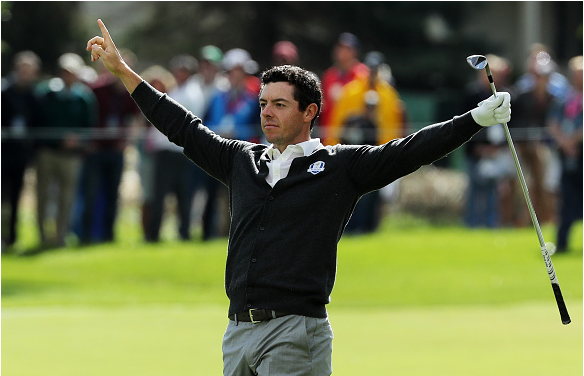 Darren Clarke and his Vice-Captains have a tough job in front of them as they’re trying to win the Ryder Cup for the fourth consecutive time, something the Europeans have been unable to do before.

Clarke leads a young team with six rookies, but also has the likes of Sergio Garcia and Lee Westwood to provide some much needed experience to the team.

So let’s take a look at the players representing the European team, and what they bring to the table – both good and bad.

Strength: One of the most consistent Europeans in this year’s squad.
Weakness: Short of the tee, Hazeltine could be a bit of stretch for him.

It’s hard to believe, but 22-year old Englishman Matthew Fitzpatrick already has two wins on the European Tour and he’s only in his second full season. Former Boys Amateur Champion and a US Amateur Champion, Fitzpatrick has amassed 15 worldwide Top-10’s in the last two years.
Strength: Solid Match-Play record.
Weakness: One of the shortest hitters at this year’s matches, Hazeltine could cause some problems for him.

One of the most experienced Europeans competing this year, Sergio Garcia will be looking to provide much needed support to the six rookies on his side. With his win at the AT&T Byron Nelson this year, Garcia matched Seve Ballesteros for the most wins on the PGA Tour for a Spanish-born player.
Strength: The passion with which Garcia approaches the Ryder Cup is more than enough to ignite the European side.
Weakness: Garcia’s game has only one concern, his putting.

Two-time Major winner and former World No. 1, Martin Kaymer has gone through two quiet seasons in a row and had to rely on Darren Clarke to be picked for the team. Four years ago at Medinah, the former World No. 1 holed a dramatic 6-footer on the 18th green in his singles match against Steve Stricker to retain the Cup for the Europeans.
Strength: Former runner-up at the Dell-Match Play also has plenty of Match-Play experience from his amateur days.
Weakness: His putting and chipping might be a concern at Hazeltine.

Newly crowned FedEx Cup champion, Rory McIlroy couldn’t have struck golf at a better time. With six rookies on the team, McIlroy is another player who can be depended upon to guide the team to a fourth consecutive victory. McIlroy played a big role in helping his side capture the Ryder Cup the last time it was played on US shores
Strength: Distance and accuracy has been off the charts in recent weeks.
Weakness: For Rory, it will boil down to his putter, which can seemingly go cold at times.

With three European Tour victories before the age of 25, Thomas Pieters is a sure bet to make plenty of more Ryder Cup teams. A tough Captain’s pick, Pieters has had a good summer including a win at Made in Denmark. Tough and intimidating, Pieters could just be Darren Clarke’s secret weapon this week.
Strength: Distance is a big plus for Pieters this week.
Weakness: Lack of experience at the biggest stages is a cause of concern.

Major winner, WGC Champion and now an Olympic Gold Medallist, Justin Rose is on a high of his own right now. Rose has proven on plenty of occasions that the Ryder Cup means everything to him. His shining moment of the matches came when he defeated Phil Mickelson in a hard fought singles match at the 2012 Ryder Cup.
Strength: Solid Ryder Cup Record and enough self-belief to dominate the matches.
Weakness: Slow year with barely much of an impact apart from his Gold Medal.

Henrik Stenson showed the world what his clubs are capable of this summer with wins at the BMW International Open, the British Open and a Silver Medal at the Olympic Games. Stenson’s injured knee could be a serious game changer for Darren Clarke this week.
Strength: His stupendous ball striking will come in handy at Hazeltine.
Weakness: Lingering knee-injury might be a point of concern.

Three-time winner on the European Tour last year, Andy Sullivan is another Ryder Cup rookie with plenty to prove. Sullivan played a crucial role earlier this year at the EurAsia Cup winning three out of three matches.
Strength: His outgoing personality could very well be his biggest strength.
Weakness: Has the game to adapt to Hazeltine, but is not coming in with the best of form.

The most experienced European team member, Lee Westwood has not missed a Ryder Cup since 1997. Unbeaten at the 2004 and 2006 matches, the former World No. 1 will be looking to serve as the backbone of the European side. Winless on any tour for more than a year and a half, Westwood could very begin a career resurgence at Hazeltine.
Strength: Westwood bring plenty of experience to the table, something that the Europeans lack this year.
Weakness: Not in the best of form, another concern for Darren Clarke.

Reigning Masters Champion, Danny Willett should be raring to prove himself as a team player at Hazeltine. Willett is another European team member who isn’t coming in with the best of form, apart from his second place finish at the Italian Open two weeks ago.
Strength: Very few can hole putts when it matters like Willett.
Weakness: Apart from his win at Augusta, hasn’t really performed all that well on American soil yet.

Englishman Chris Wood earned the biggest win of his career earlier this year at the BMW PGA Championship. Chris Wood was another one of those players who helped Darren Clarke’s European side beat the Asian team at the EurAsia Cup in Malaysia earlier this year.
Strength: Don’t go by his looks, Wood’s a phenomenal putter.
Weakness: Lack of experience at this stage.