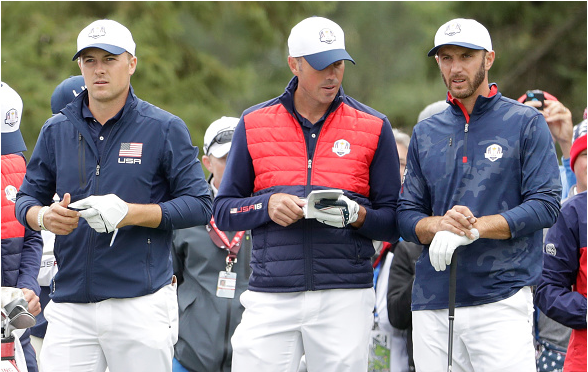 Today is an excruciating day for golf fans. The Ryder Cup has been hyped up for months, and has especially picked up steam over the week of practice. Golf fans have become accustomed to tournaments starting on Thursday, but the Ryder Cup is a three-day event that starts on Friday. Being only one day away is great, but it is not an easy wait.

In today’s PGW daily, we talk more about the Ryder Cup, Jim Herman plays in especially challenging conditions, and the FedEx Cup Champion makes an announcement that will make South Africa happy.

Gift of the Day

England’s Tyrell Hatton gave his girlfriend a pretty nice gift: a new range rover. He describes it as an “upgrade from the A class”.

A relative unknown before this season, Hatton made some waves with great finishes at The Open (T5) and the PGA Championship (T10). He did well on the European Tour, where he is currently 9th in the Race to Dubai standings. His best finish on the year was a solo-second at the Scottish Open in early July, the week before he posted T5 at Royal Troon.

Jim Herman is at the Elie Golf Course in Scotland. They have periscope to see when it is safe to hit off the first fairway.

The opening tee shot @ Elie is blind, so there's a submarine periscope in the pro shop so you can see when it's safe to tee off. pic.twitter.com/Q75Yzm7a2Q

It may not matter though, as wind gusts are going to make the fairway impossible to hit:

Herman was one of the biggest surprise winners on the season, winning the Shell Houston Open in early April. It exempted him for the rest of the majors of the season, with Herman’s best one a T43 at The Open Championship. He did most of his damage off the tees this season, finishing 14th on Tour in total driving.

A Man of His Word

Fed Ex Cup Champion Rory McIlroy told Ernie Els, the host of the South African Open, that he would put the January event on his schedule for next season. Today, he made good on that promise.

It is a big get for the tournament, as the stars do not usually compete at events that early in the year, with the exception of the Hyandai Tournament of Champions in Hawaii.

The Sunshine Tour put out a video for it:

Billy Horschel has a great set-up for some morning cycling. He is on Pelaton, which allows him to join some of the world’s best spinning leaders. He has it set up to look like he’s riding on the water.

The 29-year-old and former FedEx Cup winner Horschel had five top 10 finishes on the year, including a T10 at the BMW Championship a few weeks ago. Despite the great finish, he did not qualify for the Tour Championship this year.

PGA.com’s version of Throwback Thursday, they put out a video showing all the American Ryder Cup players as very young golfers.

Most of them look much different than now, except for Jordan Spieth’s, which looks like it could have been taken last week.

Best View of the Day

Ryder Cup USA put together an amazing feature to make fans feel closer to the course: a 360-degree tour!

LPGA in the Far East

The LPGA is in the Asian stretch of their schedule, this week at the Reignwood LPGA Classic in Bejing, China. After one round, here is the top 5 on theleaderboard:

World #1 Lydia Ko is not in the field this week, which provides an opportunity for world #2 Ariya Jutanugarn to further close the gap. They are neck and neck for Player of the Year honors.

I'm going to ask you about rugby only

Sure I'll just do what you do. Pretend I know something about it. https://t.co/KLNmhvCN3J

Lowry was the 54-hole leader at the U.S. Open at Oakmont back in June, but was unable to hold off Dustin Johnson. Lowry is expected to be among the better players on Tour next season.