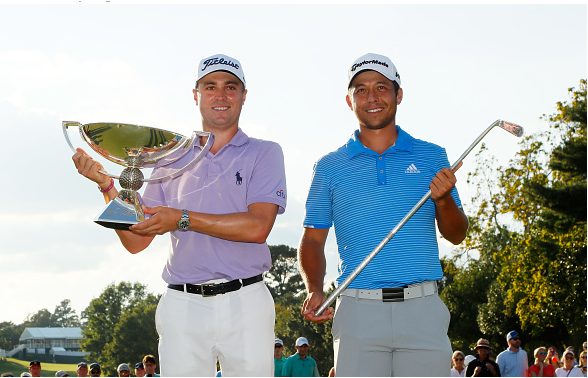 That would make a tremendous career for 95% of the PGA Tour, but for Justin Thomas, it makes an unbelievable season that will shortly be further validated with his well-earned PGA Tour Player of the Year Award. 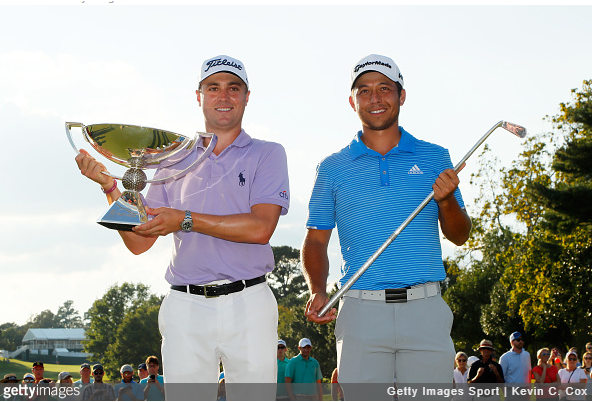 Thomas’ 66 in the final round of the Tour Championship, allowed him to reach 11-under for the tournament, and more importantly, it allowed him to leapfrog close friend Jordan Spieth for the No. 1 position on the final FedExCup standings and win the season-long FedExCup, a prize that comes with a $10 million check.

Thomas seemingly has it all now. Well, except for one thing: a Tour Championship. That was captured by the one man to shoot lower than Thomas over the four rounds of the FedExCup finale: Xander Schauffele, a vibrant rookie who just put an exclamation point at the end of one of the most out-of-nowhere stories in recent sports history.

With a three-foot birdie putt on the 18th hole that very nearly rolled out of the cup, the 23-year-old Schauffele shot a final round 2-under 68 to claim a one-stroke victory over the much-richer Thomas.

It was the first time since 2009 that the winner at East Lake did not take the FedExCup, as Schauffele jumped from 26th to 3rd in the final standings, falling short of only Thomas and Spieth, two 24-year-olds who might very well become the two best players of their generation.

HOW SCHAUFFELE DID IT

Schauffele started the day in a tie for second place, two strokes behind Paul Casey, but the rookie took a “nothing to lose” approach to the day that seemed to prevent him from getting uncomfortable. 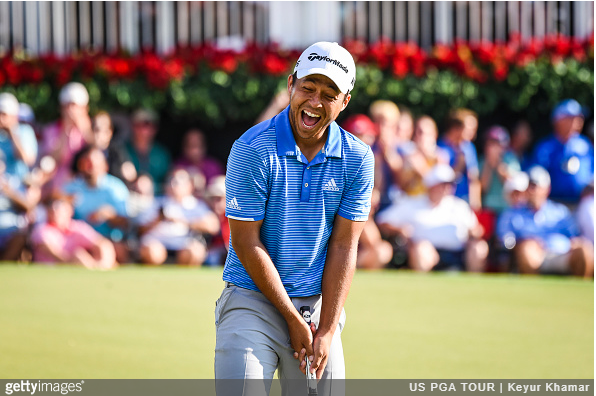 An early trip-up on hole No. 4 dropped him to 1-over on his round, but it would end up being his only bogey of the day.

A birdie on No. 6 remedied an early hiccup, and after Paul Casey started to falter, as he always seems to do in the final round of these playoff events, Schauffele and Kevin Kisner were sitting on top, but with a host of elite players such as Thomas, Spieth, Jon Rahm, and Brooks Koepka chasing them.

After a birdie on 13, his second of the day, Schauffele reached the lead for the first time. Keeping composed, he parred 14, 15, and 16, but after Justin Thomas sunk a birdie putt on 17, Schauffele and Thomas were tied at -11, with the former having one hole left and the latter having one.

On the par-5 18th, a hole Thomas had played under par each of the first three days, a poor approach doomed him for a par, and after Schauffele got up-and-down for a gutsy par on 17, he was a final-hole birdie from a Tour Championship.

A beautiful drive was followed up by two more spectacular shots, given the circumstances, and three-foot birdie attempt rolled around the cup and slipped in, giving Schauffele the win.

For the week, Schauffele did his most damage with his driver, leading the field in strokes gained: off-the-tee. He consistently put himself in great positions on the fairways, taking a lot of the stress off his irons and putter.

WHAT IT MEANS FOR SCHAUFFELE

Schauffele was largely unknown coming into the 2017 season, but first burst onto the scene when he contended at the U.S. Open, finishing an excellent T5. 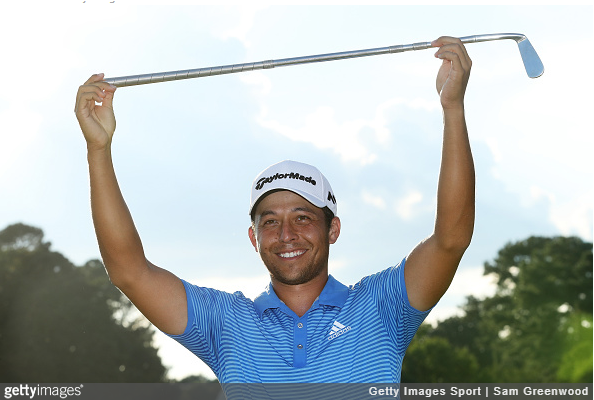 Proving that performance at Erin Hills was not a fluke, Schauffele won The Greenbrier the next month. Now, with this victory, in a tournament he played his way into late on Sunday at last week’s BMW Championship, Schauffele is no longer an up-and-comer: he is here.

With two victories, Schauffele is a lock to win PGA Tour Rookie of the Year. He will be playing in every big event in the foreseeable future, and is exempt on Tour for the next three years, a huge deal for a man who needed to play in the 2016 Web.com Tour finals to acquire his 2017 PGA Tour card.

Also, by finishing No. 3 in the final FedExCup standings, Schauffele earns an additional $2 million, a fact he was not aware of until an NBC analyst informed him during his post-round interview.

Going into the FedExCup Playoffs, Thomas and Jordan Spieth were neck and neck in the race for PGA Tour Player of the Year. Now, with a FedExCup Championship on top of his five 2017 wins, there is no longer doubt. 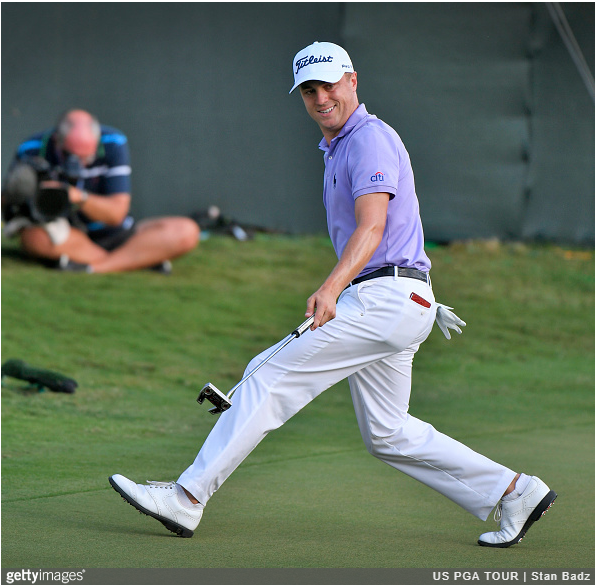 Thomas was disappointed not to also capture the Tour Championship, but chances are, he will sleep just fine tonight anyway.

Jordan Spieth might not feel great about finishing behind Thomas in the final FedExCup standings after holding the No. 1 spot coming into East Lake, but his 3-under 67 in the final round was one of the best in the Sunday field. 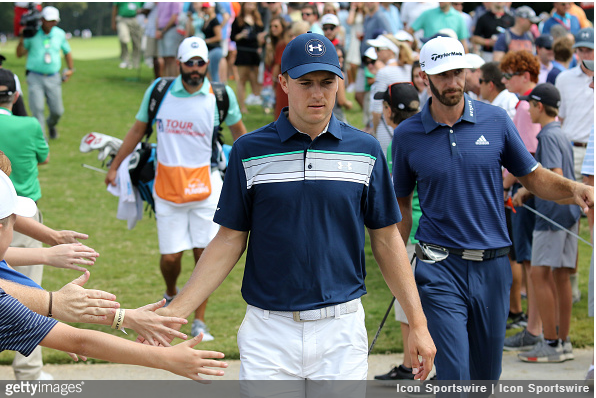 Spieth started the day well back of the lead, but after a hole-out eagle on the par-4 10th, he was suddenly just a few strokes behind and appeared primed to make a charge. That charge fell short, however, and after the round, Spieth referred to his T7 East Lake effort as “his worst putting tournament in a long time”. Spieth finished in the top 10 of all four playoff events, leading to a No. 2 finish in the final standings.

The round of the day came from an unexpected place. Russell Henley got his Sunday off to a fast start, with birdies on three of his first four holes.

Fourteen bogey-free holes later, Henley had shot a field-low 5-under 65 to reach 10-under and tie for third – a great finish for the man who came into the Tour Championship at No. 27 in the FedExCup standings after posting just one top-20 since The Masters in April.

Coincidentally, that top-20 finish was a T5 at The Greenbrier, a tournament won by Xander Schauffele.

Shooting just one shot worse than Henley was Tony Finau, who with a 4-under 66, had one of the best rounds in the Sunday field for a second-consecutive week. Finau finished at 7-under for the week, good for a T7 and his 8th top 10 of the year.

LIMPING TO THE FINISH

Over the past three FedExCup Playoffs, Paul Casey now has seven top-5 finishes. The paychecks are no doubt nice, but the 40-year-old from England is tired of the close calls, and the questions about his ability to close will become even more deafening after a 3-over 73 in the final round of The Tour Championship turned a 54-hole lead into a T5 finish. 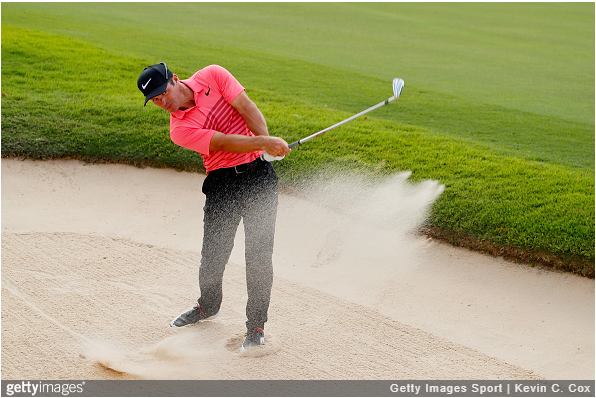 Bogeys on 4 and 5 set Casey off-course early, and he did not manage a single birdie on the day until the final hole. Casey remains winless in the U.S. since the 2009 Shell Houston Open.

The Tour Championship represented another tournament for Jason Day where he looked great for 90% of the tournament, but could not put together four rounds.

At six strokes out of the lead to start the final round, Day needed a tremendous round to get himself into the leader mix, but a dismal Sunday round of 4-over 74 dropped Day into a tie for 17th in the 30-man field. The Presidents Cup is all Day has left in what feels like a lost season for him.

Patrick Reed has an awful history at East Lake, but was putting together his best career performance, reaching 7-under through 54-holes.

However, it ended up being more of the same for the recent PGA Championship runner-up, as a double bogey, bogey stretch late on the front nine put an end to his hopes of notching his first 2017 win. With a final round 2-over 72, Reed finished T13.

“It has been a wild ride; I weaseled my way in, just from last week I’ve been weaseling my way around all year, so to stand here and hold this [the trophy] is definitely an honor.”
-Xander Schauffele, Tour Championship Winner