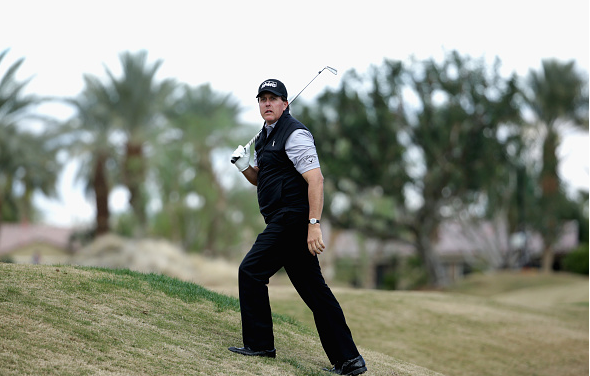 Phil Mickelson was touch-and-go leading up to this week’s CareerBuilder Challenge, due to recent hernia surgery. But the 46-year old California native appears to be in good form – at least through 36 holes.

After two rounds, the 5-time major champion is at 10-under par and in a tie for 6th – just 4 shots back of the lead.

One of the main reasons for Mickelson’s success (throughout his career, and over the past two days) has been his lights-out ability to scramble.

“My short game has been something I’ve been able to work on and it’s not anywhere near as rusty as the other parts of my game,” said Mickelson, following his second round. “I hit a lot of good chip shots and holed a bunker shot and had some good opportunities where it saved me from some poor swings.”

The hole-out bunker shot Mickelson was referencing happened on hole number 1 at the Nicklaus Course.

When asked if he knew it had dropped for an eagle, Mickelson said that he was too far below the hole to get a visual, but realized it when the fans began to cheer.

“I was so far down I couldn’t see the ball. But I saw the people behind the pin jump up and was surprised that it had gone in,” said Mickelson.

Mickelson will be playing the TPC Stadium Course for his third round of play with a 12:50 PM tee time.