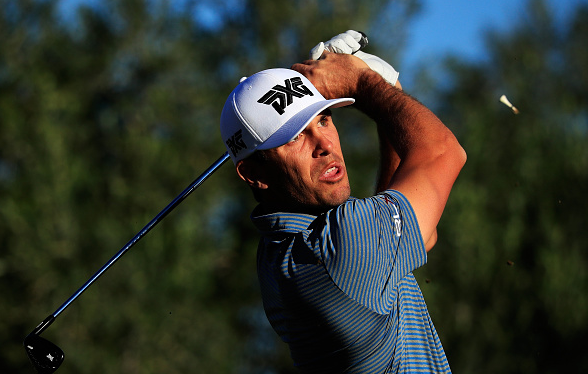 Rod Pampling fired an 11-under 60 in the opening round of the Shriners, and leads the Vegas event by 2-strokes over John Huh and Brooks Koepka.

Billy Horschel is all alone in 4th, just 4 back, after shooting a 7-under 64. Matt Jones, rookie phenom Jon Rahm, and Luke List, the 54-hole leader at last week’s Sanderson Farms, are tied for the 5th spot at 6-under par.

Here’s a roundup of quotes from the top 5 after the day one at TPC Sumemrlin.

“To be honest, I wasn’t really thinking too much about it. Obviously the front nine came around quickly, chipping in and then holing out and bringing the next couple. So I got to 5 and 6 pretty quick. And we just picked up the birdies on the way through. And it got there quick, but when I hit it close on 16, that got my attention as to this is a really good round. It was nice to finish it off. The putt on 17 just fell short in the jaws and on 18 I gave myself a bad read. I thought it was straight, but it just had that little left to right.”

“I guess everything, with the driver from the tee shot to the green, and the plastic, everything was pretty good. Always nice to have a bogey-free round and with nine birdies, it’s always nice bringing.”

“I thought I rolled the field really well today. We did some work this whole week. We really were focusing on making sure, got my playing coach out here, making sure the speed was right. Last week I struggled with the speed of the greens, but the greens are beautiful out here, so it’s easy to make putts.”

“Yeah. That was a really good start. Obviously it’s my first event in seven weeks since BMW Championship. Been working really hard. Yeah, it was nice to see the putter working. Switched to the new PXG Gunboat, last week when I was in Scottsdale, got on their machine and they said this putter was meant for me. And it was nice to see some putts go and especially at the end. I had some good putts go in the middle of the round to go and like I said, really nice to start off the season with a nice 7-under par.”

“It was nice I hole a couple of putts on 11 and 12. The par-5 was kind of boneheaded. I hit a beautiful drive and only had 7-iron in. I think the hole was like 600 yards. And just left it in kind of a funky spot below the green and just fluffed the chip. It happens with this grass out here. I wasn’t beating myself up too much for that. I knew there was a couple of holes I could finish up with birdie, and I was fortunate enough to do that. Holed a monster eagle putt on 15, which was cool.”