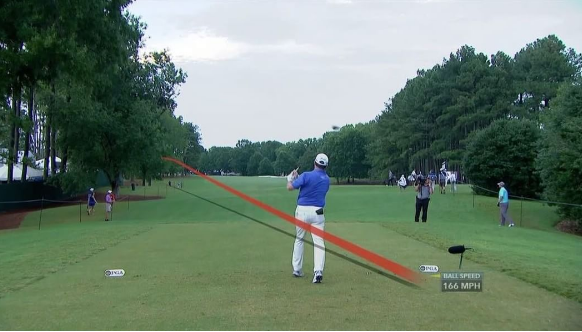 After the horn had blown, suspending play in the second-round of the PGA Championship due to darkness, the trio of Rod Pampling, Thomas Pieters, and Xander Schauffele still had one hole to play.

Clearly not wanting to stay overnight to play one hole on Saturday morning, while understanding that they’d be allowed to finish the round if one player were to tee off before the horn, Pampling apparently volunteered and took one for the team.

The Aussie quickly snaps on his glove, and, without a practice swing, just whacks a punch shot to the left to avoid the group in front. (Check out the tracer – 13 feet off the ground!)

Jim Nantz and crew were cracking up, “Watch this (hahaha) have you ever seen a shot like this (hahaha) in a major championship!?”

All three of them would go on to make double bogey on the hole (No. 9). Strangely, the cut line was at 5-over and Pieters finished 6-over following his late double. Had he simply made par or bogey (on one of the easier holes at Quail Hollow), he’d be playing this weekend. Additionally, Pampling finished at 8-over and so he was just one off the cut line when he basically threw away a shot. A birdie here and he’s playing the weekend too.