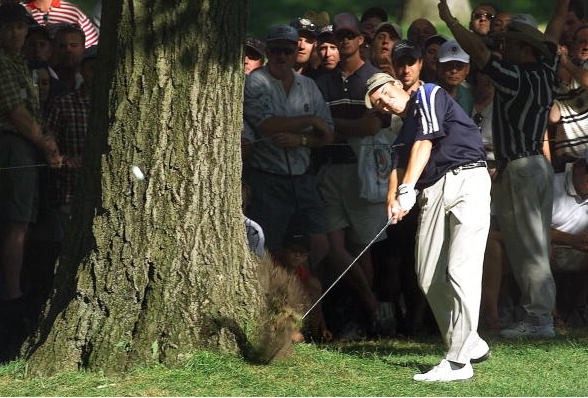 During a Wednesday press conference at Baltusrol, Sergio Garcia was asked if not having won a major at this point in his career was something he needed to resolve in his mind. Sergio had a long answer, which is not surprising as he has been asked that question for what feels like 20 years now.

“No, not any more,” said Garcia. “Like I said to Doc before, maybe five or ten years ago it would have, but not anymore. I understand how difficult it is to win every week. I’ve always said it doesn’t matter if it’s a major, it doesn’t matter where it is, it doesn’t matter if it’s in the U.S., Asia, Europe, in Africa, it is tough to win. And nowadays there’s the level of play from guys coming up and everything, it’s so much higher than it used to be, so that’s great for the game of golf. The only thing I can do is keep giving myself chances, and just wait for it. Hopefully, it’ll happen. If it doesn’t happen it’s not going to change my life; I’m not going to go in a cave and stay there until I die because I didn’t win a major, or anything like that, so it’s not that serious, but I’m not going to lie, it would be nice to win at least one, but it’s not the end of the world.”

In a sense, it is refreshing to see such a humbling response from someone whose maturity has been questioned so often over the past 15+ years. He has perspective, and has accepted that his entire life is not defined by whether or not he wins a major championship. He has had many successes, and while he would still like to win a major, he has prepared himself to be ok if it never happens. It is an admirable point of view, but is it a winning one?

Sergio’s response is such a sharp contrast with what new major winner Henrik Stenson was saying after winning The Open Championship, just a week and a half ago. Stenson took a very dominant mindset going into the week; he said that he knew it was his time, and he took it. He did not concern himself with the hordes of amazing younger players on tour. He refused to consider a future where he was not a major champion.

Maybe what worked for Stenson would not work for Sergio. Not everyone can be the alpha dog, but some would say that if Sergio has already accepted that he might never win, he has already lost.

Taking a step back, it is crazy that this is even a topic of discussion. This year’s PGA Championship marks the 17 year anniversary of Sergio’s epic duel with Tiger Woods at the 1999 PGA at Medinah.

Just 19 at the time, the skill and moxie that Sergio showed while staring down a living legend in his prime, made nearly everyone a believer in his future.

His shot from behind a tree on the 16th hole is one of the most iconic moments in PGA Championship history. He had been an amateur superstar, and had already won on the European Tour.

Sergio fell one stroke short of Tiger that year, but everyone thought it would be just a matter of time before he’d be standing in the winner’s circle on the biggest stage.

Yet, here he is at 36, still majorless. Since finishing second in that 1999 battle, he has been runner-up in three other majors, the closest call coming at the 2007 Open Championship at Carnoustie (look at the 1:17 mark on the embedded video), when a lip-out on 18 dropped him into a playoff with Padraig Harrington, which he would go on to lose. He has finished at least 4th in all four majors. Overall, he has 22 top-10s in majors, but no victories.

So far, the 2016 major season has been a sweep for players who had not previously won a major. It has been a season that we all thought would be about Jason, Jordan, and Rory, but has instead been about Danny Willett, Dustin Johnson, and Henrik Stenson. This leaves many wondering, why not Sergio? He has been written off so many times as someone who just doesn’t have what it takes.  He has even publicly questioned it himself.

So, what does he have going for him this year? His form has been tremendous. With a T5 at both the U.S. Open and The Open Championship, only Sergio and J.B. Holmes have multiple top-5 finishes in majors this year. He won the Byron Nelson and was the runner-up at the Honda Classic. He is currently 10th on the European Tour’s Race to Dubai standings. Worldwide, he has only finished out of the top 18 once this year.

Possibly his most impressive stat has been leading the tour in something called “bounce-back”, which looks at how often a player is over par on one hole, and then under par the next. That is a great sign for his mental game.

Even his putting, which has long been his achilles heel, has not been a liability (99th).

He is 12th on the PGA Tour money list this year, 13th on the FedEx Cup standings, and 10th in the world rankings.

His game is there, he has the experience, and his style is a good fit for the course. There is good reason to believe that major start #73 could be major victory #1 for the former can’t-miss prospect.