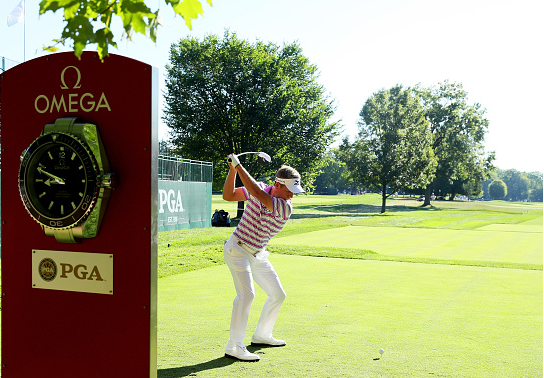 The first round of the 98th PGA Championship at Baltusrol Golf Club kicks off tomorrow. Yesterday and today were the official practice rounds for the world’s best players.

Here are some of the best photos of the practice rounds from Getty Photographers. (Pro tip: Mouseover to see photo’s credit.)

A Selfie With a Side of Beef

Andrew Johnston of England takes a photo with a fan at Baltusrol.

British Open champ Henrik Stenson of Sweden autographs for a fan on the 14th hole.

Dustin Johnson of the United States keeps an eye on his tee shot.

Kristoffer Broberg of Sweden looks on from the ninth hole during a practice round.

Luke Donald of England tees off on the tenth hole at Baltusrol.

Jordan Spieth and Phil Mickelson of the United States play a practice round together.

Justin Rose of England is given instruction by Sean Foley.

Rory and The Americans

Rickie Fowler is interviewed by TNT’s Amanda Balionis during the Long Drive Competition.