Henrik Stenson shot a 4-under-par 66 on Saturday and heads into the final round of the Wyndham Championship with a one-stroke lead.

The 41-year-old Stenson was at even-par on his round, after 12 up and down holes (four birdies, two bogeys, and a double). 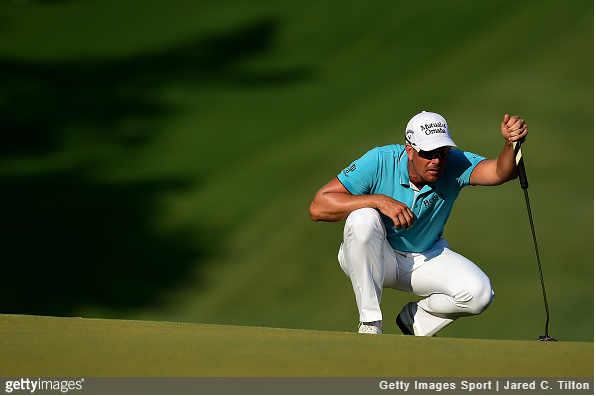 The 2016 Open Champion settled down, though, and finished with four birdies over his final six holes to get to 16-under par and the outright lead, one ahead of Webb Simpson.

“It’s all about how you finish, I guess,” Stenson said. “I came back strongly, great birdies coming home and right where we want to be.”

Simpson who was the 54-hole leader with Ryan Amour, was tied with Stenson after 16 flawless holes of golf, but a late bogey on the par-4 17th dropped him back to 15-under.

“Any time you’re within two or three of the lead, you know you’ve got a good chance,” Simpson said. “And for more guys on tour, it’s not every week that you have a chance to win. Hopefully, I’m going to take advantage of it and come out and play a good, solid day.”

Johnson Wagner was 14-under following a 5-under 65, highlighted by a hole-out eagle on the par-4 first.

“You can’t win a tournament on Saturday but you can certainly put your name out of the mix. I started off nice and made four birdies in the first six holes, then I had a bit of a rough patch. Bad 7-iron on 7 that cost me two and bad tee shot on 11, cost me another bogey.

Standing on the 12th, things weren’t going great but I was hanging in there and kept my patience and kept on hitting good shots and got the reward for a couple of good shots and couple of putts coming in and birdied four of the last six.”