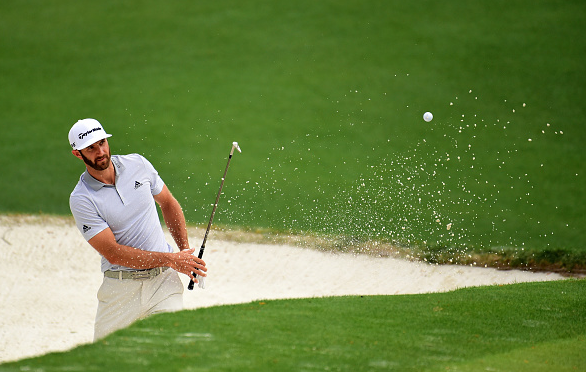 The biggest story of the PGA Tour season has been the remarkable transformation of Dustin Johnson from PGA star to professional sports superstar.

Considered among the best on Tour at the end of 2017, Johnson is now unquestionably the single greatest player in the game (currently). The dazzling, seemingly unstoppable ability he has shown lately made it all the more unfortunate that he was forced to withdraw from The Masters after a freak off-course back injury.

According to Johnson, he slipped off a staircase at his rental property while descending it in socks. He gets the benefit of the doubt for now, but one thing that sports has taught us: if somebody gets hurt in a bizarre set of circumstances, you should be skeptical. The best examples of this are Jeff Kent’s “truck washing” injury, and the time Thomas Jones broke his hand answering the phone.

Regardless, the injury sidelined him at the worst possible time. He had won his previous three starts (with numbers 2 and 3 coming in WGC events), elevated to #1 in the world, and then further strengthened his hold on that position.

Since the season started, an anomalous missed cut at the Farmers Insurance Open in January is his only finish outside the top six. Needless to say, he was the favorite going into The Masters. The Wells Fargo Championship marks Johnson’s first start since the withdraw heard around the world.

Not only is this DJ’s first start since The Masters, it is also his first attempt at the Wells Fargo since 2011. There may be some rust to shake off, but at a course that nobody in the field has played in an official, competitive PGA Tour event, the unreal state of his game is the biggest advantage anyone has.