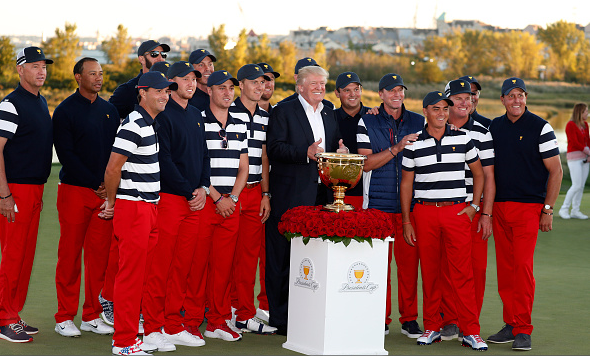 It is not quite the Harlem Globetrotters vs the Washington Generals, at least not yet, but the United States continued a dominant streak over “the Internationals” at the Presidents Cup that has become the closest thing in golf. 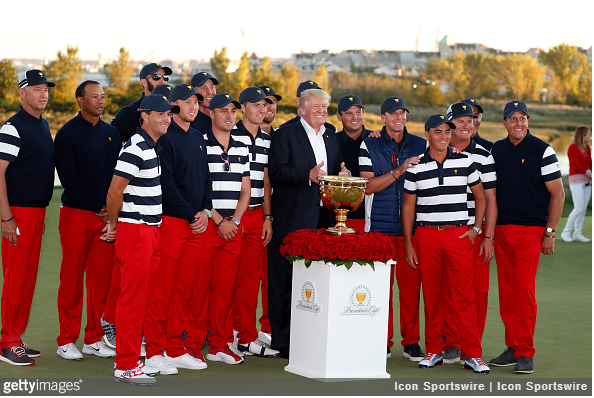 Two years after a scrappy international golf squad led by Nick Price just barely missed pulling off a stunning upset over the heavily-favored Americans at the 2015 Presidents Cup, Price, again acting as the International Captain, was determined to finish the job in 2017.

With a tremendous mix of youth, talent, and relative American inexperience (six Presidents Cup rookies), he was optimistic. After four days, Price is now left wondering what went so wrong. Beginning the day 11 points back of Steve Stricker’s American squad, the Internationals just had too much ground to make up after three days of team-play ineptitude.

Team International went down swinging, however. With the Americans entering Sunday’s Singles with a 14.5 to 3.5 lead, and needing just one point to clinch the Cup, the Internationals had by far their best day, losing just one of the first 10 matches, and just three on the day in total.

While there was never a sense that the tide was turning, it was a respectable final day that Nick Price and were very proud of. After a meager 3.5 points over the first three days of competition, the Internationals notched 7.5 on Sunday, and while it still counts as a loss for them, 19-11 looks much more respectable than what could have been.

The first match of the day featured Kevin Chappell, a Presidents Cup rookie, against Aussie Marc Leishman, the winner of the recent BMW Championship, and one of the international side’s most experienced players. 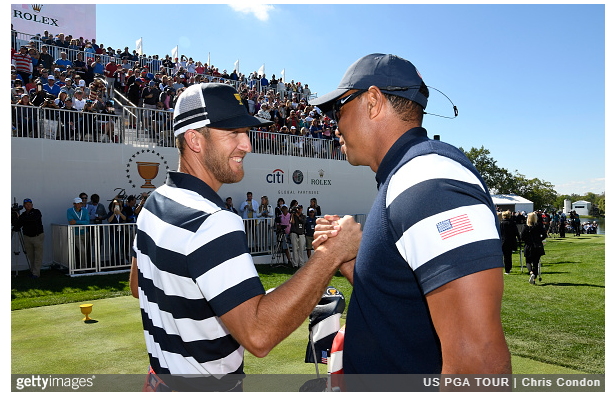 A Chappell victory would have clinched a U.S. victory with 11 matches still to go on the day, and early on, it looked like that just might happen, as he went 2-up after just three holes, but Leishman birdies on 9 and 10 squared the match.

On the back nine, the Aussie twice went 1-up, but in both circumstances, Chappell fought back with birdies of his own, including one on 17 to re-square the match with one hole to go. Both landed their tee shots inside 15 feet on the par-3 18th, but neither was able to capitalize on the opportunity, and with two tap-in pars, the first duo of the day took a half-point apiece, meaning the U.S. would be just another half-point from clinching the Cup.

Day surprisingly failed to win a single match for the Internationals in 2015, and was on pace to have it happen again as he went 0-3-1 over the first three days. 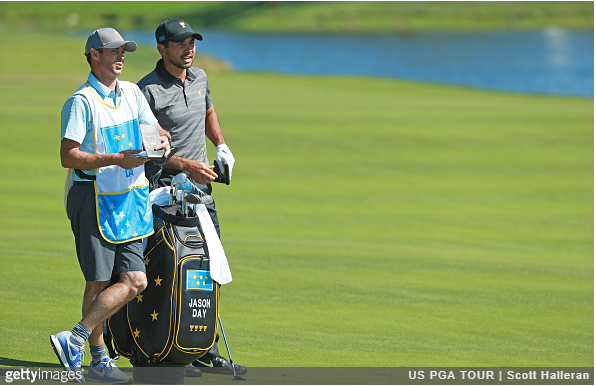 However, after a back-and-forth front nine with Cup rookie Charley Hoffman, Day birdied the first three holes on the back nine, and never relinquished his lead, as a missed 10-footer for par on 17 from Hoffman ended the match.

Had Hoffman been able to hold onto the lead he had after nine holes, this American team would have had all 12 players finished with non-losing records, but he was unable to shake off the streaky Day, finishing the Cup with a 1-2-0 record. Day won, but his Cup history is ghastly as a whole: 4-12-4.

This was the ultimate matchup of hot versus cold as Thomas is a week removed from winning the FedExCup, a four-week stretch where Matsuyama looked exhausted, and was unable to build anything resembling momentum. 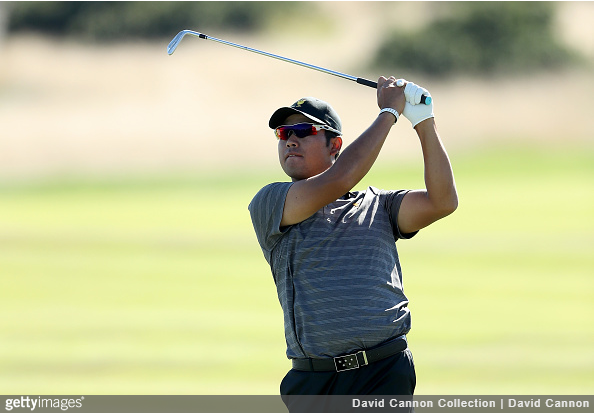 Those trends continued through three days as Thomas was 3-0-1 going into singles, with most of his damage done as half of a formidable pairing with Rickie Fowler, while Matsuyama was dreadful in team play (0-2-1), and especially struggled off the tees.

Thomas played well, but left disappointed that he was unable to notch that clinching point for the U.S. in his first professional team-play tournament.

This match featured the youngest-combined pairing (46 years), and was the only Sunday match to pit two cup rookies against each other, but it went largely as expected, with Berger never trailing in the match. 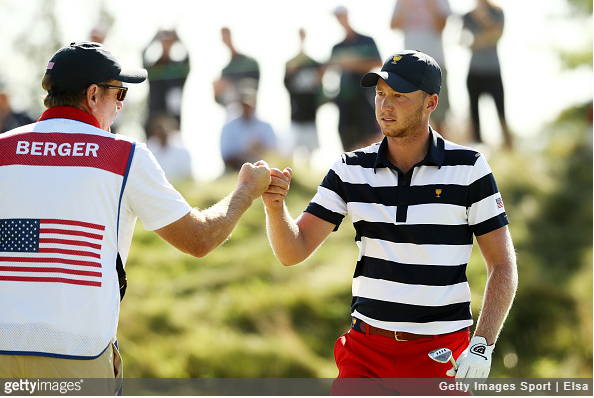 Berger jumped out front early with a birdie on the second hole, and when he hit 3-up on 15, it clinched at least a half-point, the last the Americans needed to officially win the Presidents Cup. Kim, who finished the week at 1-2-0, had one of the signature moments of the tournament when he shushed the crowd after a birdie on 11 to halve the hole and stay two holes behind Berger.

Coming into the tournament, Kuchar was 0-3-0 in his singles career at the Presidents Cup and 1-7-0 in the Presidents and Ryder Cups combined, but he still figured to have an advantage over Schwartzel, who had been demolished in both of his team matches. 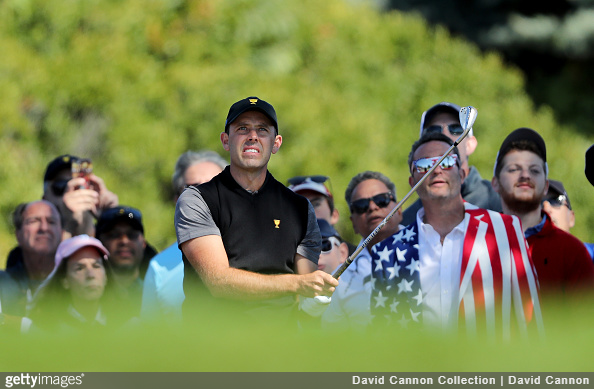 Kuchar’s surprising singles troubles continued early, as Schwartzel jumped out to a 5-up lead after seven holes. Kuchar did well playing himself back into the match, however, as a birdie 2 on the par-4 12th was his best hole in a stretch that saw him narrow the lead to just one after a birdie on 14.

This was the matchup of the team-format heavyweights, as Reed, who was 3-0-1 over the first three days, has looked unbeatable at the last two Ryder Cups, and Oosthuizen was 4-0-1 at the 2015 Presidents Cup. 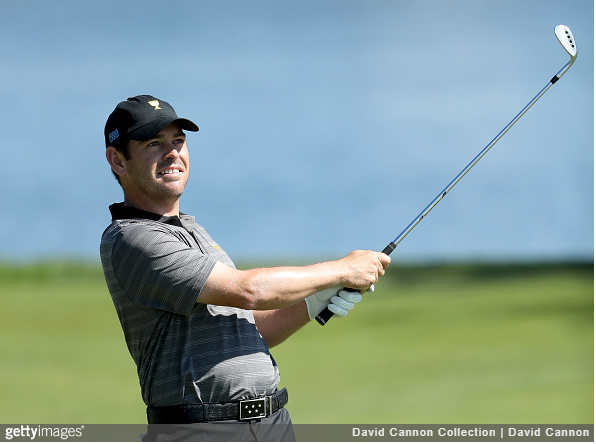 The match lived up to the billing as neither was able to get more than one hole ahead of the other. With Reed leading 1-up after 16 holes, Oosthuizen squared the match with a birdie on 17. He then added a second birdie on 18 when he knocked his tee shot to within 12 feet, while Reed butchered the final hole for a par.

Oosthuizen was the only player on the International side to win two matches for the week (2-2-1). 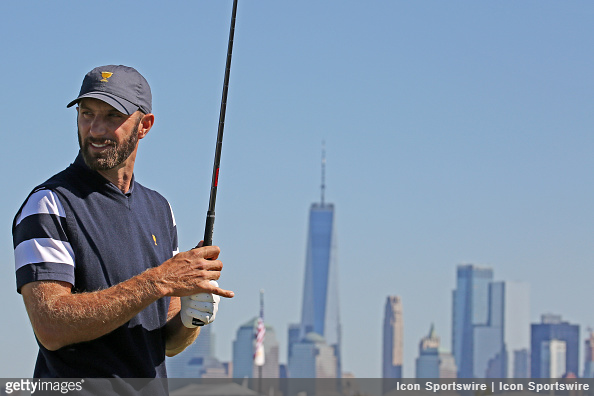 After a birdie on 15, Johnson was just three holes from matching 2015 Grace, but after conceding 17, the match was all square. Matching pars on the final hole meant both players would leave with half a point, and Johnson would have to settle for a 4-0-1 record, scoring the most points of anyone in the tournament.

As they had done in the last Presidents Cup, Grace teamed up with Louis Oosthuizen to form the most productive International team.

Having played in the previous six Presidents Cups, Adam Scott is the most experienced player on the International side, but based on recent form, he was not considered the favorite in a match against Koepka, a Presidents Cup rookie. 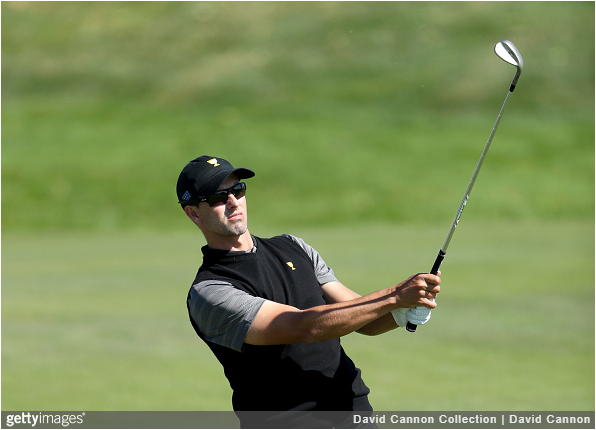 After going 0-3 in his first three matches of this event, Scott finally found his game on the back nine, winning five straight holes: 12, 13, 14, 15, and 16 to turn a two-hole front nine deficit into his 14th career Presidents Cup victory. Koepka played well during the week, although he ended up as one of just two American players with multiple losses (Hoffman).

When Sunday matches were announced, this one looked like perhaps the biggest mismatch. Spieth is already a legend at the age of 24, while Vegas, thought to be a great locker room addition for the Internationals, had played poorly in his last three tournaments, and was 0-4 after three days at Liberty National. 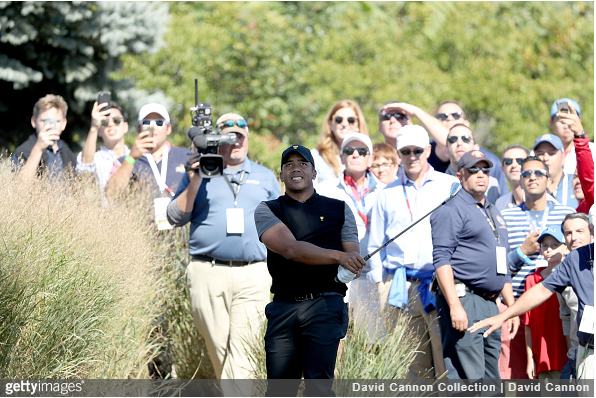 Despite a great overall record in both the Presidents and Ryder Cups, Spieth came into the day 0-4 in singles matches, but that felt largely fluke-ish.

After what turned into a one-sided affair, what felt like a fluke might now be a trend. Spieth struck first with a birdie on 4, but it would end up being his only lead of the day, as the notoriously streaky Vegas turned on the jets, as he sometimes does, and basically put the match out of reach by the 12th hole, when he reached 4-up.

Bogeys by Vegas on 13, 15, and 16 brought the score closer, but the match ended when both players parred 17. It became the first career point scored by Vegas, the 33-year-old from Colombia.

Another Presidents Cup rookie, Kisner played very well over the first three days, being paired with Phil Mickelson and going 2-0-1. Kisner played poorly on the front nine against Lahiri, but gained some momentum after Lahiri hit his second shot on the par-5 9th into the water. 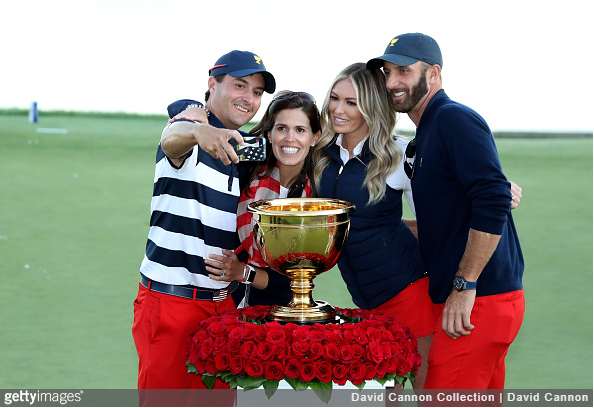 Kisner’s lead reached 2-up with just two holes to play, but a bogey on 17 brought Lahiri to within one. Lahiri then stuck his tee shot on 18 to within 12 feet of the hole, and three Kisner shots later, the final hole was conceded to the 30-year-old Indian, meaning a half-point for both teams. With a 1-1-1 record for the week, Lahiri, a captains pick despite his struggles in the 2015 Presidents Cup, was one of just two International players to not finish the week with a losing record (Oosthuizen).

The vet of all Presidents Cup vets, Phil Mickelson came to the rescue and slowed the American bleeding, with only one U.S. golfer in the first 10 matches leaving with a win (Berger). 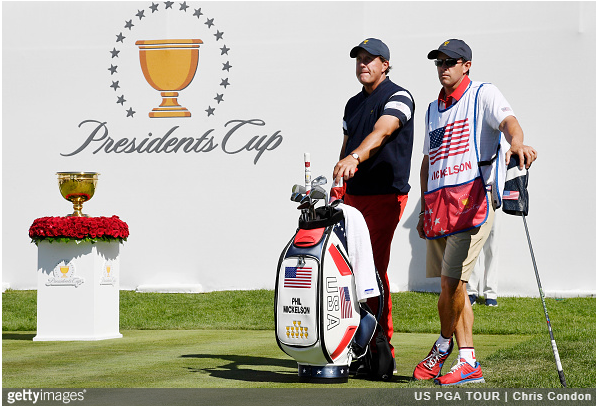 The event’s all-time wins leader had another vintage team-format performance, capping off a 3-0-1 week with a dismantling of Cup rookie Adam Hadwin from Canada.

Hadwin won the opening hole with a bogey, but fell flatter after, as Mickelson took the next four holes and reached 4-up by the 10th. The match ended on 17 after both players missed long birdie putts. Hadwin finished 0-1-2 for the week.

The blowout of the day came ironically came from Fowler, the man who was blown out 6 and 5 on Sunday in the 2015 Presidents Cup. Fowler played phenomenally with Justin Thomas in team play, but was even better in singles, absolutely crushing Grillo, a Cup rookie from Argentina. 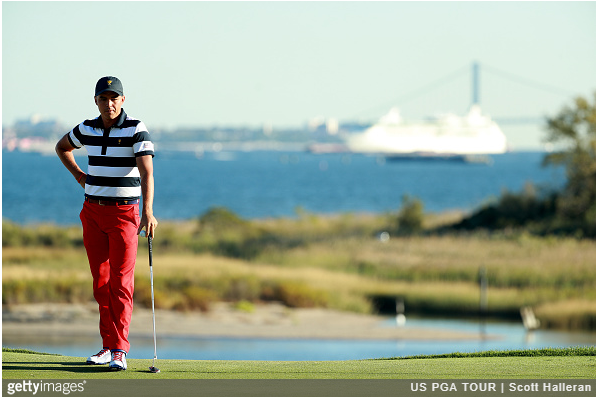 “It was a fun ride. These guys played so well. They played great all year long and they came here with a lot of confidence. They continued it right through this tournament. So proud of them all; they just kept grinding it out, and kept fighting, and never lost the focus. They played great.”
–Steve Stricker, Presidents Cup Captain (USA)