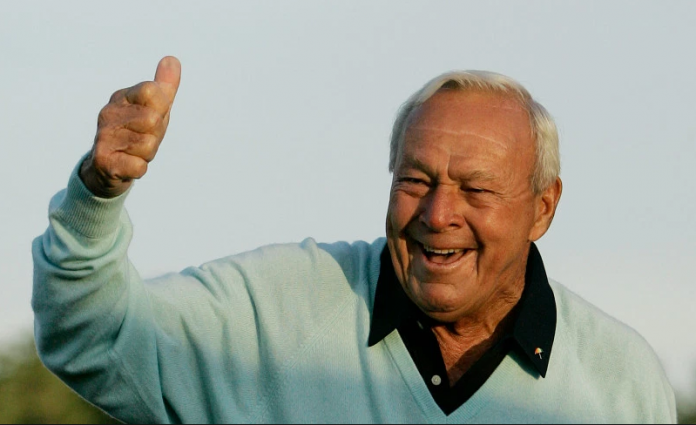 A ceremony to celebrate the wonderful life of Arnold Palmer takes place today at 11 AM on the campus of Saint Vincent College. Speakers will include Jack Nicklaus, Tim Finchem, and Annika Sorenstam. The service will be televised live by the Golf Channel.

Pro Golf Weekly will cover it throughout the day.

"He was an everyday man. Everyone's hero." -Jack Nicklaus on Arnold Palmer#ArnoldPalmer pic.twitter.com/g6NhNe6J3Z

"Remember when Arnold Palmer touched your life and please don't forget why."

Amazing tribute by Jim Nantz as he invites family/friends to give Arnold Palmer one last standing ovation…#TheKing pic.twitter.com/PVkP8T73oS

Sam Saunders Sent Off His Grandfather With Class

"Let's think about how we can pass along Arnold's blessing to all those who come after us." – Archabbot Douglas R. Nowicki pic.twitter.com/gV7ZyxocSr

The Ryder Cup is placed inside the church by Rickie Fowler, Bubba Watson and Phil Mickelson.

The Color Guard arrive in the church for Arnold Palmer’s service.

A look inside the church.

Join us in remembering Arnold Palmer.

Bubba Watson and Rickie Fowler get emotional before the service.

A nice picture of The King from GolfWeek.

Thank you, Mr. Palmer. For everything you did. Long live the King.https://t.co/bfCydvPSQd pic.twitter.com/jOJvscINhL

Neat tribute from a member of Arnie’s Army.

Sir Nick Faldo is in attendance.

As is the Big Easy, Ernie Els.

Many attendees arrived by private plane at Arnold Palmer Airport.

Many flew in to pay tribute to Arnold Palmer pic.twitter.com/Epp5Zvo5DF

Watching #ArnoldPalmer memorial service. What a great guy. He paved the way for athletes endorsements. Prayers to his 2 daughters & family.

Gary Player, one of Arnie’s chief rivals, and fellow member of the Big Three.

The Man Who Thinks He Can was one of #ArnoldPalmer's favourite poems & he certainly embodied this mentality. pic.twitter.com/mrCgcJVxGs

A couple of beautiful quotes from Arnold Palmer.

Annika Sorenstam is on her way.

Arnold Palmer was a veteran of the U.S. Coast Guard.

Thank you, Mr. Palmer. For everything you did. Long live the King.https://t.co/bfCydvPSQd pic.twitter.com/jOJvscINhL

Rickie Fowler and Bubba Watson arrive with the Cup.

Pro golfer Rickie Fowler with the recently-won Ryder Cup trophy outside of the memorial service for Arnold Palmer in Latrobe pic.twitter.com/MJ6rbREv4r

Latrobe is the center of the golf world today.

Arnold Palmer's memorial service will be held today in his hometown of Latrobe, Pennsylvania.

We will be live streaming at 11 a.m. ET. pic.twitter.com/bqovZCdmog

A neat look inside the locker of Arnold Palmer at Latrobe CC.