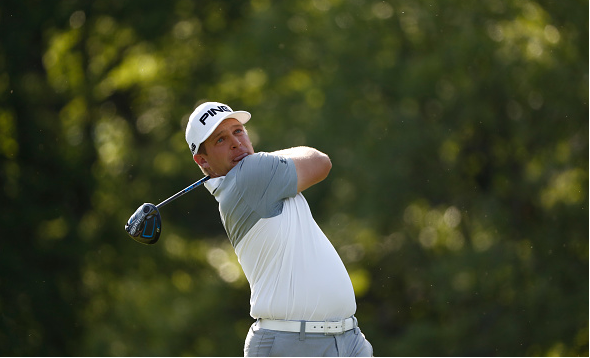 Daniel Summerhays posted a 4-under 68 on Saturday at Muirfield Village, and heads into Sunday’s final round with a three shot lead over Matt Kuchar (67) at the Memorial.

Summerhays is at 13-under 203, following a efficient third-round which included five birdies and just one lone bogey.

Kuchar, who moved up five positions, from T7 to solo-2, started out slow, going even-par through seven. But then closed his front-nine with back-to-back birdies, and finished strong with four more birdies over the final six holes to get to 10-under.

Jason Dufner, who entered the day five up on the field, started out par-bogey-bogey-bogey-bogey on holes 1-5, and never recovered. A birdie on 7 was quickly wiped out by two balls into the water and a double-bogey-7 on the par-5 11th.

Dufner traded birdies with bogeys down the stretch, ending the day with a 5-over 77. Despite the ugliness, Dufner is still in the hunt at 9-under, and just four off the lead, tied for third with Bubba Watson (68) and Justin Thomas (69).

The mover of the day at Muirfield was James Hahn, who jumped 46 spots up the leaderboard, all the way to T14, following a sizzling 7-under 65.

“Today was pretty pathetic on all accounts, so have to play better tomorrow.”
–Jason Dufner, 36-hole leader

“A train wreck can happen at any moment. And that’s why it’s such a great golf course because it does test everything. Legitimately from the first hole to the 18th hole, there’s a double bogey somewhere in there.”
–Daniel Summerhays, 54-hole leader