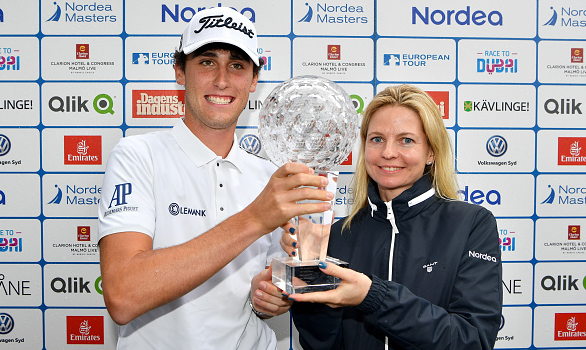 Italy’s Renato Paratore claimed his first European Tour title at the Nordea Masters after the 20-year-old posted a final-round 3-under 70, and then watched 54-hole leader Chris Wood (72) bogey the final hole in Malmo.

Wood’s bogey on 18 dropped him into a tie for second at 10-under with fellow Englishman Matt Fitzpatrick (68), the defending champion.

Denmark’s Thorbjorn Olesen (71) and South Africa’s George Coetzee (66) tied for fourth at 9-under.

"Complimenti!" ???? @RenatoParatore gets a hug from fellow Italian winner @Matteo.Manassero.

Renato Paratore’s winning round in under 3 minutes.

“I couldn’t be happier now. This win means a lot to me. I was one behind the leader so I knew if played well I could win and in these tough conditions I kept a good attitude until the end.
–Renato Paratore, Nordea Masters Champion