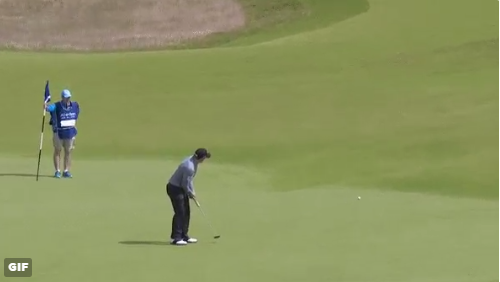 The Aberdeen Asset Management Scottish Open is being played at Castle Stuart Golf Links in Inverness, Scotland. The big time golf event is part of The Open Qualifying Series, as the top four finishers (who haven’t already qualified) will punch their ticket to Royal Troon next week.

The links-style golf course at Castle Stuart is considered one of the world’s greatest.

Note the term “links-style.” Because check out this putt by Paul Dunne of Ireland on the par 5 2nd hole.

The ball goes up, then down, then disappears as if it went through one of those mini golf underground pipes — finally appearing again on the lower level, with some serious speed.

The only thing that’s missing is the Windmill.

And speaking of wind…

Golf across the pond looks like so much fun.