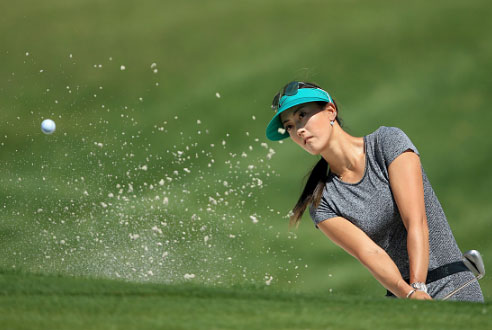 “In the 50 LPGA events Wie has played since her U.S. Women’s Open victory, she has recorded just one top-10 finish, and that was the week after the victory,” Randall Mell of GolfChannel.com writes. “She has missed the cut or withdrawn in seven of her last nine starts.”

“Wie’s results this year are stunning: In 16 starts, she has cashed a check only seven times. Her best finish – T-25 at the Coates Golf Championship – came in February,” reports Beth Ann Nicols in GolfWeek.

“There have been a series of well documented injuries since her U.S. Women’s Open victory, but they don’t fully explain where she’s at today,” continues Mell. “While she struggled through a stress fracture in her index finger shortly after winning at Pinehurst, then battled hip, knee and ankle injuries most of last year, and then neck spasms this spring, she says she’s healthy now.”

“It’s been a struggle this year. But I still have half a year left, and I’m just trying to get some confidence,” Wie says in the Golf Digest report. “I feel pretty good at the moment. I’m happy to come in here pain free.”

“Wie hopes to rediscover her mojo in the Bay Area, where she spent her college days at Stanford. She often speaks passionately about her experience there,” reports Ron Kroichick at SFGate.com. “She visited Stanford’s campus Sunday morning and came away re-energized and appreciative of her path.”

“Remarkably, this is Wie’s 15th year playing in LPGA events and it’s all been interesting – both the ups and the downs,” continues Sirak. “Along the way, she has transitioned from a controversial figure to a player everyone is rooting for. That may be her most important victory yet.”

Excerpts is a Pro Golf Weekly feature where we weave together excerpts from some of golf’s best writers to tell an even more compelling story.