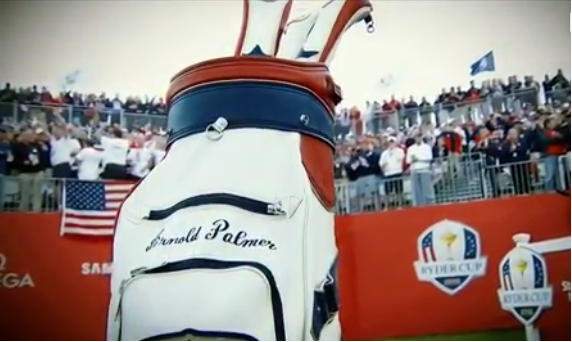 It’s essentially Arnold Palmer week, and so the PGA of America posted this cool remembrance of the King to their Instagram account.

It’s a quick look at one of the (many) moving tributes to Palmer during last year’s Ryder Cup matches at Hazeltine.

NBC’s Mike Tirico, does the voice-over – describing the U.S. team’s decision to place Arnold Palmer’s Ryder Cup golf bag from 1975, as a reminder (and good luck charm): “There’s a reason that bag was there. The message I think was sent. And the message was sent by the Americans this morning,” and the b-roll transitions to the crowd chanting, “A-r-n-o-l-d P-a-l-m-e-r (clap clap – clap clap clap) A-r-n-o-l-d P-a-l-m-e-r (clap clap – clap clap clap)…”.

#TBT to the incredibly moving tributes paid to Arnold Palmer at the Ryder Cup. #ArniesArmy

It was bone-chilling and epic.