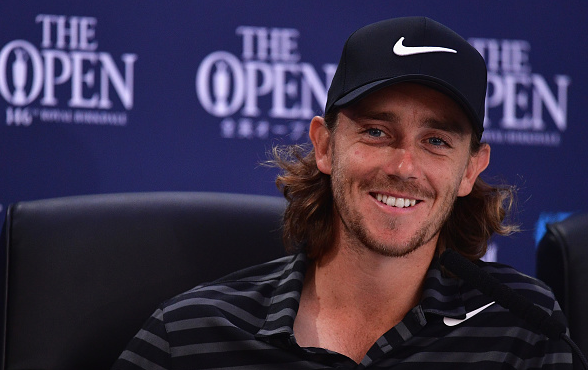 Englishman Tommy Fleetwood arrived in the press room at Royal Birkdale for one of the first interviews of the 146th Open.

The 25-year-old, who left Troon last season ranked No. 153, has rocketed up to 14th in the world, thanks to a season which has included two wins on the Euro Tour, and a 4th place finish at the U.S. Open last month.

The three questions we spotlight are related to Fleetwood’s background as a native of Southport.

1.) I gather you played most of the courses around here, but not so much Birkdale. Did this course hold a bit of mystique about it because you couldn’t play it on that much?

FLEETWOOD: When I bumped on. Yeah, well, I mean, Southport in itself is up there with, say, St. Andrews as a golfing town. That’s what it is. There are so many golf courses, great golf courses. Yeah, for me growing up Royal Birkdale wasn’t a course that I would be playing on. I’ve played it a few times. I’ve got mates that I’ve played with. You might get on once a year and have a game. But it’s very different turning up and getting out of the car and going and playing 18 holes to actually prepare for a tournament, you see things you wouldn’t quite know before and it is very different.

Yeah, growing up, I mean, when I was very little, it was Royal Birkdale, isn’t it? If you ask anybody playing this week that’s been here before they’ll say it’s one of the best courses in the world, very arguably the best Open venue. If you live five minutes away, you’re going to try to get on when you can.

I might have be bunked on the other time and hit the odd shot. But that was about as far as it goes. Yeah, it’s very cool. It was a course I would have crept on now and again. It’s where The Open is and now I’m playing.

2.) Following up on that, if one wanted to sneak on to Royal Birkdale, where is the right place to go in and how exactly do you go about it?

FLEETWOOD: You can’t sneak on the places that we used to sneak on anymore. The 5th was the place that used to be a lot more open, and it’s got fences and bushes there now, so that’s gone. You can’t even got on to watch The Open anymore.

My dad now walks the dog, you start to the right of the 18th green, and you can walk all the way around past 17, at the back of 16th green, eventually you get to hillside and it’s all one long walk. It’s a very cool walk.

You can try, I wouldn’t recommend it. I mean, we were very clever about it, or my dad was, not me. Yeah, it’s a lot tougher these days.

FLEETWOOD: ’98 was my first Open I went to watch. And my first memory was just Justin Leonard who was on the cover of the book. I remember Tiger Woods walking past me. That was the first time I’d ever seen Tiger Woods, and the aura around him at the time. Apart from that, don’t remember much about that, apart from I didn’t get many autographs. I spent the time walking and faking them in my little book.

I remember the conditions last time being horrendous, and obviously the course played very, very hard. And it is that kind of course, really. It’s tough, and the way it played last time was very difficult. But I tried not to watch it last time; that one hit me hard. So it’s good that I made this one.