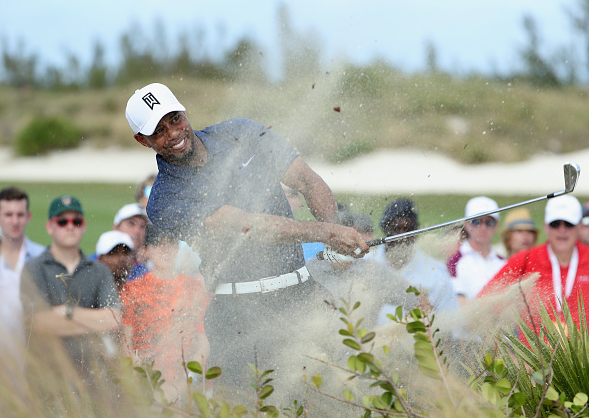 Moving day in the Bahamas at the Hero World Challenge is on tap in a few hours, and there are eleven golfers within 6 strokes of co-leaders Dustin Johnson and Hideki Matsuyama.

Including one named Tiger Woods.

The former undisputed heavyweight champion of professional golf fired a sizzling 65 in round two and sits in 9th place, tied with Henrik Stenson and Rickie Fowler.

Before we move on to what should be an exciting round number three, let’s take a look at the 10 best photos of Tiger’s big day – from the photographers at Getty Images.

Tiger plays a shot from the sand on the sixth hole.

2. All Eyes on Tiger

Tiger tees off on the 15th hole.

Tiger attempts a long bomb putt on the 13th hole.

Tiger plays a shot out of a green-side bunker on the sixth hole.

Tiger gives it a fist pump after a long birdie putt on the 16th hole.

6. Calm Before the Putt

Tiger tosses his ball on the 12th hole.

Tiger lines up his putt on the 8th hole.

8. Tiger Gives Us a Scare

Tiger is reacting to his shot with some body english, not an injury.

Tiger liked his shot so much he smiled in the mid swing.

10. Finishing Up His Business