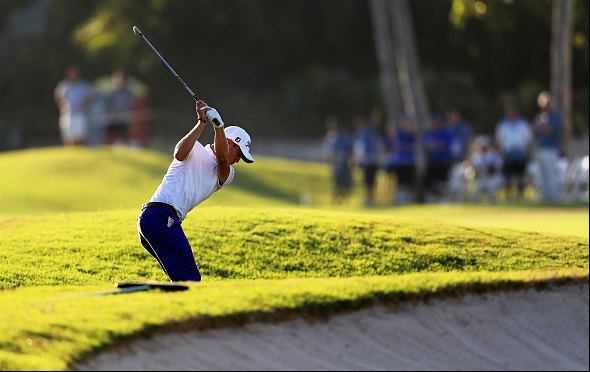 Round number two at the Sony Open was filled with low scoring which pushed the cut line to 3-under. Justin Thomas followed up his opening-round 59 with a 64, and was able to extend his three-shot lead to five.

Gary Woodland is currently in 2nd, five shots back at 12-under.

Hudson Swafford and Zach Johnson both had the lowe rounds of the day, 9-under 61s, and moved into a tie for the 3rd spot with Justin Rose at 10-under par.

To wrap it up, here are the three best shots from Friday’s round.

The two-time major champion, Johnson, provided one of the rounds of the day. While playing hole number 18 (his 9th), Johnson’s 2nd shot found the green-side bunker but that didn’t stop him from holing a 29-yard bunker shot for eagle.

Johnson went on to make five birdies in his closing nine to card a 61 and move 71 spots up the leaderboard.

Thomas hit his tee shot on the final hole of the day into the left rough but hit an excellent approach shot into the par-5 green to about 9 feet. Thomas went on to make the eagle putt and set the lowest opening 36-hole score in PGA Tour history.

Couple Of Near Aces

Troy Merritt’s tee shot at the 17th nearly rolls in for a hole-in-one. Merritt finished at 2-over for the tournament, which resulted in a missed cut.

Also finishing at 2-over and missing the cut, Ben Crane provided some excitement at the par-3 7th by hitting his tee shot to within 4 inches.

Thomas also had a near-ace yesterday, which can be viewed here.