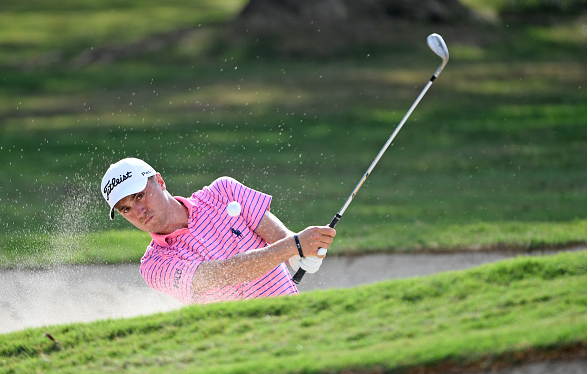 Another round in the books, and another considerable lead for Justin Thomas. It wasn’t another 59 this time, but it was close to his second round 64.

Thomas fired a bogey-free 5-under 65, and takes a seemingly insurmountable lead into the final round of the Sony Open at Waialae in Honolulu, Hawaii.

At 22-under-par through three rounds, the closest man to Thomas is two-time major winner Zach Johnson who is at 15-under.

If he does what feels inevitable, and holds onto the lead, Thomas will have a ridiculous three wins in the young PGA Tour season, including back-to-back victories in the two-week Hawaii swing.

Five birdies over his final 11 holes led to the 5-under 65, his worst round of the week, only because his first 36 holes were so incredible. For the third consecutive round, Thomas hit around 50% of his fairways (7/14 in round 3), and 14/18 greens in regulation.

An argument could easily be made that Justin Thomas is really the only player in contention, but a few guys went low and improved their long-shot chances.

For the second time this week, someone stood on the tee of their 18th hole (the par-5 ninth hole both times) needing an eagle for a 59. Unlike Thomas, however, who got his eagle, Kevin Kisner was unable to convert his eagle putt (despite his ball actually being closer to the hole than Thomas’s) and had to settle for a still-phenomenal 60.

Kisner was 5-under on both nines (all birdies, no bogeys) to post the career-low score. Unfortunately for Kisner, he was just at 3-under through the first two rounds, so even with the 10-under third, Kisner still finds himself nine strokes back at -13.

Tied in sixth with Kisner is Jamie Lovemark, who had one of the better rounds of the Day. Lovemark, who carded a 5-under 65, hit more fairways in the third round (10) than he did in the first two rounds combined (9).

Zach Johnson also shot a third round bogey-free 65, a good follow-up to his second round 61. Johnson will be Thomas’ partner in the final round.

For a while, Cameron Smith looked to be getting into contention for the first time since makes waves at the 2015 U.S. Open (he finished T4).

After birdies on 10, 11, and 12, Smith got himself into second place at 13-under-par. However, he then carded bogeys on four of his next five, leading to a third round score of 1-under 69, one of the worst rounds of the day.

Over the course of the final six holes, he fell from solo-second to a tie for 28th.

Largely unknown Satoshi Kodaira, who plays primarily on the Japan Tour, was in a tie for 6th place after going 65-66 in the first two rounds, and surprisingly leading fellow countryman Hideki Matsuyama.

On Saturday, Kodaira played his back nine 1-over and fell into a tie for 28th after a disappointing round of even-par.

Going into round three, Gary Woodland was the closest contender to Thomas, but needed much better than the 2-under 68 he posted, and he now sits 8 strokes out of the lead.

“The main thing I’m focused on right now is getting some food; I’m pretty hungry. I just have to keep going out and doing what I did today. I was really happy to go bogey-free, that was kind of a big goal of mine, and I had a couple saves which was pretty easy. I was putting in position off the tee; I just need a good night’s rest, and come out here and try to do it again tomorrow.”
–Justin Thomas, third round leader.