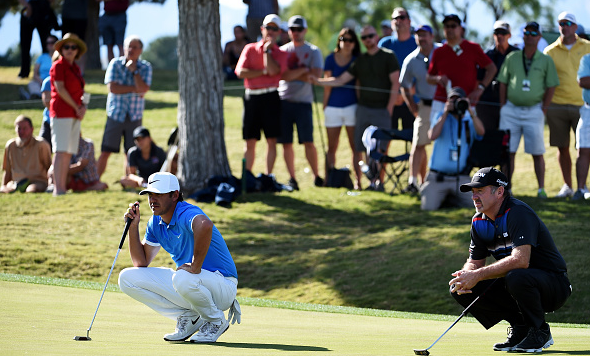 Rod Pampling was the surprise winner of the Shriners Open, essentially going wire to wire, following his record-tying 60 in round one. The 47-year-old Aussie, who has struggled with his game in recent years, now finds himself with a new lease on his career, thanks to a 2 year PGA Tour exemption.

Other winners at the Shriners Open included the photographers from Getty Images.

Here’s a roundup of the best pictures of Pampling on Sunday at TPC Summerlin. (Credit Getty Images)

Rod Pampling tees off on the ninth hole in the final round of the Shriners.

Pampling plays a shot on the ninth hole during the final round.

Pampling reacts after his shot on the ninth hole.

Brooks Koepka and Pampling wait on the ninth green.

Pampling tees off on the 18th hole at TPC Summerlin.

Koepka, playing in final group with Pampling, tees off on 18.

Pampling lines up the clinching birdie putt on the 18th hole.

Lucas Glover reacts after his shot from the bunker.

Pampling celebrates after making a birdie putt to clinch the win.

Pampling congratulates his caddie after his win.