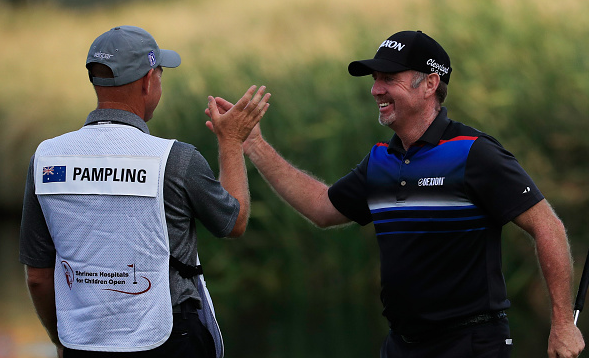 Of all the names near the top of the leaderboard going into the final round of the Shriners Hospitals for Children Open, Rod Pampling’s was probably the smallest; his primary competition included a young star from the recent winning Ryder Cup team (Brooks Koepka), two former U.S. Open champions (Lucas Glover, Geoff Ogilvy), and a PGA Champion (Keegan Bradley).

At the end of the day, however, the name of the 47-year-old who had not won in a decade was the biggest one on the trophy.

Pampling birdied four of his last six holes to shoot 65 and outduel Koepka and Glover down the stretch. It was a phenomenal result for the previously downtrodden Aussie whose best 2015-16 finish was a tie for 38th place.

Pampling clinched his first win in his last 220(!) events when he calmly drained a 32-foot birdie putt on 18. He played his front nine in -4, showing the field that he was not going to shrivel up on Sunday.

Bogeys on 10 and 12 temporarily put Glover in the driver’s seat, but a furious finish, with birdies on 13, 14, 15, and 18 gave Pampling a final round of six-under par and the unlikely two-stroke victory.

Pampling started his tournament red hot, shooting a near-flawless first round 60 and while it was not a wire-to-wire victory (Glover had the 54 hole lead), Pampling never faded far from the lead.

Through the first three rounds, Pampling had done most of his damage tee-to-green, but his biggest friend on Sunday was his putter, gaining 2.92 strokes on the rest of the field. Tying 2nd in the field for the week in birdies and 3rd in eagles did not hurt either.

What It Means For Pampling

While these wins are always significant to the champion, this one felt a little extra special for Pampling. The man who barely qualified for anything anymore now has a 2+ year exemption and invites to many elite events (The Masters, The Players, and The PGA Championship among them).

There was nothing going in that would have led anyone to expect this: Pampling had not made more than $200,000 on tour in five years, he finished 195th in the 2015-16 FedEx Cup Standings, and his two other finishes in this new season were a missed cut and a tie for 42nd place.

The exemption could not have come at a better time; at 47 years old, he now has his card set until he turns 50 and is eligible to play on the Champions Tour.

The pace for the final round was set early when Italy’s Francesco Molinari, who started the round in a tie for 46th place, shot a bogey-free 10-under 61 that featured eight birdies and an eagle.

The round put him at -16 for the tournament, which for a little while, looked like it might be good enough for the win or a playoff.

Molinari had shown great form going in; he finished T6 at last week’s WGC-HSBC Champions, and won the Italian Open (European Tour event) in mid-September. Molinari finished in a tie for 4th place.

Tied with Molinari for the week was Harris English, who wins the tournament’s consistency award, shooting four consecutive four-under 67s.

Luke List had the second lowest-round of the day, a seven-under 64, but his third round 73 ended up being too much to overcome as he finished T15.

Chez Reavie might have won this tournament if it had started on Friday: he got off to an atrocious start with a first round 76 before going 61-68-67 over the rest of the final three rounds finish T24.

“It’s extremely rewarding. Winning Arnold Palmer’s event in 06 is still on top, but coming back from what we have the past few years to get a win under the belt is just phenomenal, amazing thanks to my wife and kids back home who have supported me the whole way, always there for me, and always giving me the confidence that it can be done, but it’s a great feeling!”
–Rod Pampling, Shriners Hospitals for Children Open Champion.