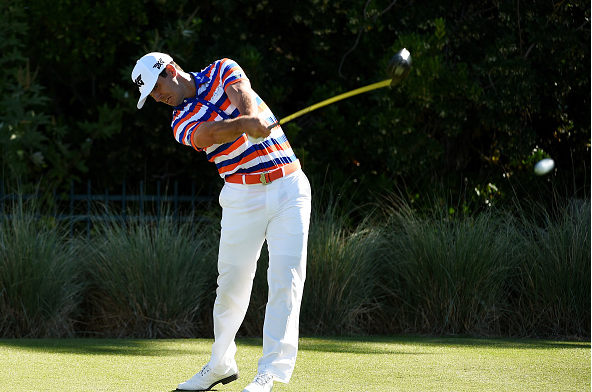 Moving day is behind us, and the 2016 version of the Shriners Open is setting up to be a barn-burner – with 11 players all within 3 shots of the lead.

Former U.S. Open Champ Lucas Glover slid into the pole position with a second-consecutive 65, and leads Rod Pampling and Brooks Koepka by a single stroke. Eight other players are within 3-shots of Glover.

Here’s a roundup of some of the best shots from round three by the photographers at Getty Images.

Keegan Bradley lines up a putt on the seventh green.

Bradley lines up another putt on the 18th green.

Russell Henley lines up a putt on the ninth green.

Lucas Glover lines up a putt on the 18th green.

Lucas Glover plays a shot on the 18th hole.

Harris English rips it from the third tee.

Scott Piercy plays his shot from the third tee.

Billy Horschel fires away from the third tee.

Brooks Koepka smashes his drive on the third tee.

What It’s All About

A standard bearer walks up the third fairway during the third round at TPC Summerlin.