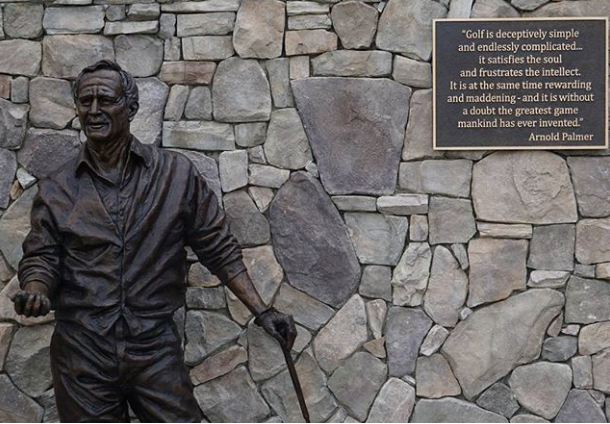 Each new week, a PGA Tour event seems to honor the King in some form or fashion. Last week, the Travelers honored Palmer with a memorial garden at TPC River Highlands, while the week prior at Erin Hills it was Arnie’s silhouette appearing on the U.S. Open flag.

Well, the Arnold Palmer Memory Tour continues this week in D.C. at the Quicken Loans National. And the folks at TPC Potomac may have outdone them all.

A statue of the King was unveiled, commemorating the legendary Palmer, and his connection to TPC Potomac: In 1986, the year the Maryland course opened, Palmer recorded back-to-back aces at the par-3 third hole over two consecutive rounds (Tuesday and Wednesday) of the Pro-Am leading up to the Chrysler Cup PGA Seniors tournament.

“That’s the most amazing … aw, my goodness … I’ve had some things happen to me, but never anything close to that,” Palmer is quoted as saying in a 1986 UPI report. “I’ve never heard of anything like that happening, much less done it myself.”

Pro-Am teammate Chi Chi Rodriguez reportedly said, “I thought Arnie walked on water before this. Now I know he does. You could give Clark Kent 10 balls and he couldn’t do that.”