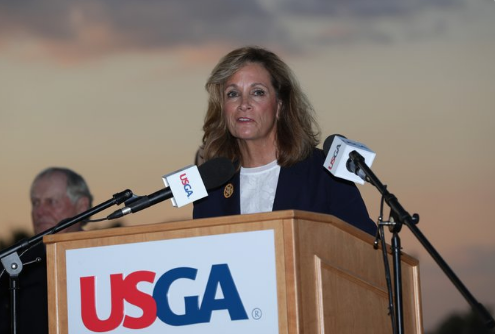 After Brittany Lang’s win at CordeValle, Murphy took to the podium and introduced the newly minted major winner to the crowd as “Bethany.”

Not once. Not twice. But three times.

Come on up here Bethany.

Fans, media members, fellow tour players, and pretty much of all Twitter, were stunned at Murphy’s actions, with many accusing the POTUSGA of being drunk.

Bethany, I mean Brittany Lincome was not too happy. Naturally.

Is it possible for the USGA Prez to mess up my first name if I win the US Senior Open? Boo?

Should we call her Dana from now on? You call me Cynthia. Way to go, @blanggolf So proud of you Honey Bear!! https://t.co/oCxwZIQ9FK

Kendall Dye wonders if Murphy is even a golf fan.

Is the @USGA Prez a golf fan? Do we even have a Bethany on the LPGA? #itsbrittanybioooottccchhhhh ?? ??????

Stephanie Smith called it an embarrassment.

How many drinks does Diana Murphy pound before speaking on national television? ?? #usga #fail #embarrassment

The media was all over it too.
Augusta sports columnist Scott Michaux checked in.

.@USGA's Diana Murphy really shines again in getting champion's name wrong. Brittany not Bethany Lang. Only got it wrong 4 times .

USGA pres Diana Murphy is the same person who sounded kinda loaded at the men's US Open, right? #bethany

Brittany Lang just won the US Open. USGA President Diana Murphy probably should have known her name. Come on. pic.twitter.com/YXSGvOyJ8F

Even my mother-in-law just texted to note that Diana Murphy got the USGA champion's name wrong. #bethany

Brett Williams of Golf Digest with some advice.

Wow @USGA Diana Murphy may need to check into rehab

@GolfweekNichols not just once.. but three times #awkward

Fans offered up some memes.

Hey Diana Murphy your the President @USGA slow down just a bit before your trophy presentations #BrittanyBethany???? pic.twitter.com/HcW8pyoyPt

Murphy was also accused of being “bombed” on TV during the U.S. Open at Oakmont.

@GolfweekMag She seemed bombed at the men's US Open too. Announced Scott Piercy as Scott Percy. A total and unforgivable embarrassment ?

Anyone else see USGA President Diana Murphy drunk as a skunk at the US Open awards presentation? Wow, totally hammered

@AshleyKMayo Diana Murphy is a total wild card and I kinda love it. Drunk at trophy ceremonies and can't be bothered to learn names.

And finally, Eamon Lynch suggests any criticism of Murphy is clearly because you hate women and stuff.

The casual ease with which so many folks on Twitter accuse USGA prez Diana Murphy of drunkenness is contemptible & stinks of misogyny.