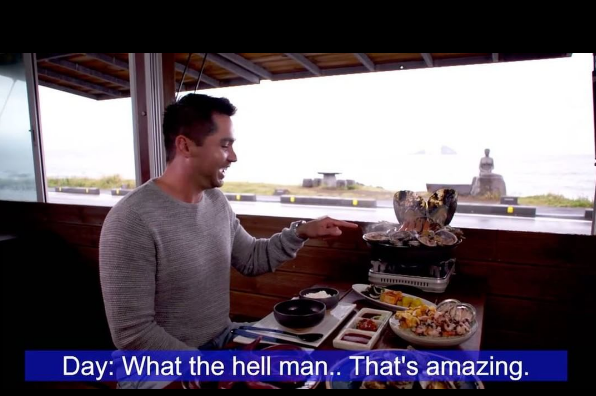 During a press conference on Tuesday at Nine Bridges for the CJ Cup, Jason Day was asked by the media about the “local seafood cuisine from Jeju Island.”

“I was talking about it earlier, ‘Haenyeo’ – the women divers – dive down 65 feet with no oxygen,” explained Day. “They are just holding their breath and dive down and catch the seafood so, it’s very, very fresh when you come down here. That’s one part of the great food you have down here in Jeju.”

The seafood is in fact “very, very fresh” – so fresh that it’s half-alive, or “in-between,” as the producer says in the clip. (Apparently the practice of eating live seafood is widespread in Asia.)

The Aussie golf star seemed freaked that his meal was moving (“what the hell, man!”), but then complimented the process by saying, “that’s amazing.”

As someone who enjoys all kinds of meat and seafood, I somewhat agree with the critical commenters who didn’t think it was so “amazing.” At the same time, I understand Day’s reaction, as he was simply trying to respect the local customs and culture.

Any criticism should be directed at the PGA Tour media team who put JDay in a tough spot.