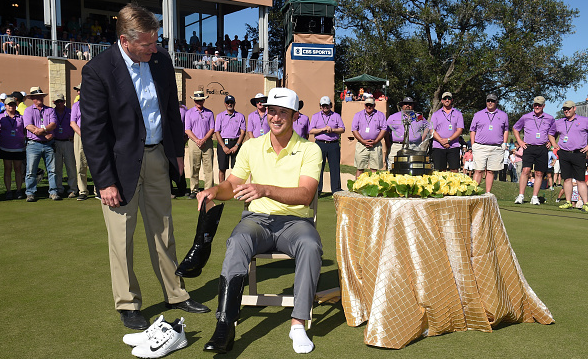 At the Valero Texas Open, Kevin Chappell, like Wesley Bryan last week at the RBC Heritage, recorded his first ever PGA Tour win.

And while Chappell didn’t win a nice jacket like Bryan, or even Sergio Garcia, Chappell did take home a nice pair of fresh Texas boots.

The 30-year-old Chappell posted a final-round 4-under 68, highlighted by a birdie on the 18th, to hold off a hard-charging Brooks Koepka, and earn his first big league check.

The win is a career game-changer for the Tour veteran, as it secures a two-year exemption and earns Chappell invites to the big-money events – Majors, WGCs, Invitationals, Playoffs, and the 2018 Tournament of Champions at Kapalua.

After his victory, Chappell noted the benefit of now being able to breathe, professionally-speaking, “It allows me even more so to make a schedule. Make it to the Tour Championship last year was huge and allowed me to make a schedule for this year but still in the back of your mind you got to secure your job out here and you can’t take that for granted… Now getting a win I can buy some plane tickets to Maui, moves me up the FedExCup, I think I was told in the Top 25, which is massive. Getting to East Lake is huge and I feel like I have some unfinished business there as well.”

As part of closing up shop on another week, and moving about 500 miles east to New Orleans for the Zurich Classic, here’s a look at the PGA Tour’s weekly video recaps from TPC San Antonio.

What a tournament.
What a finish. pic.twitter.com/8wm8EciaMp