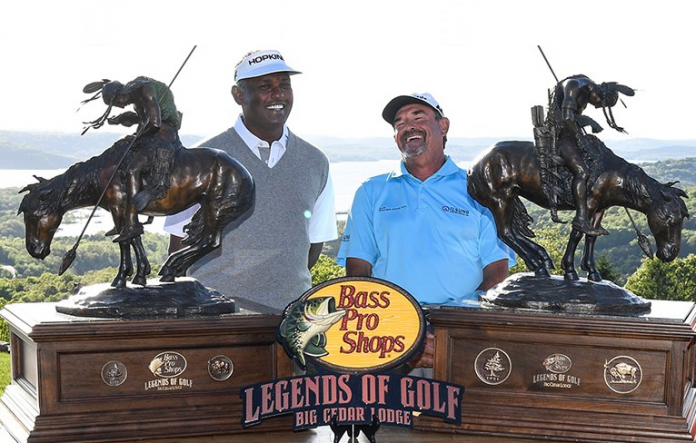 Carlos Franco and Vijay Singh combined to shoot a course-record 12-under par in Sunday’s final round at Top of the Rock and win the Bass Pro Shops Legends at Big Cedar Lodge.

Starting the day seven-shots back of first round leaders, Jeff Sluman and Fred Funk, Franco and Singh finished the (rain-shortened) 36-hole tournament at 15-under – one shot clear of three other teams at 14-under, including Sluman and Funk.

Corey Pavin and Duffy Waldorf, along with Paul Goydos and Kevin Sutherland, were the two other teams to finish at 14-under.

Franco with the putt that capped off a course-record 12-under-par.

Go ahead and dance, @carlosfrancopga.

The Franco/Singh team shoot 12 UNDER today for a new course record. They lead by 3. @BassProLegends pic.twitter.com/lW44aAsb7h

Franco and Singh pose with the Bass Pro Shops trophy.

“I love playing with Carlos. I’ve known him for a long time, and if it wasn’t for him, I wouldn’t be here, so I’d like to thank Carlos.”
-Vijay Singh

“I came in unprepared this week, because I know my partner is a strong player. He gave me big help this week, and I gave him a bit of help, too, and I’m so happy.”
-Carlos Franco

Course Spotlight: Top of the Rock at Big Cedar Lodge