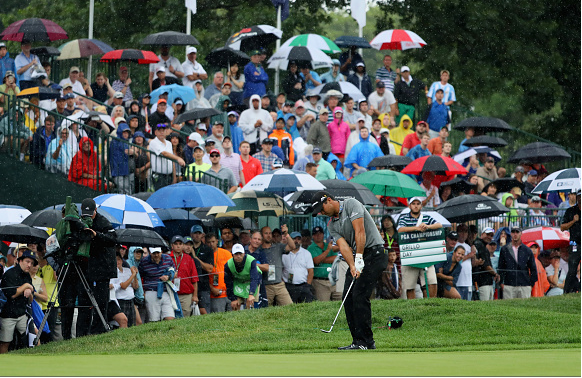 Jason Day fired a 3-under par this morning for his third round. The defending PGA champion sits at 10-under for the tournament, one shot behind leader Jimmy Walker. Day will tee off at 3:07 pm with third round partner Emiliano Grillo (The PGAA did not reseed).

Here’s Day’s thoughts following his third round this morning at a rainy Baltusrol Golf Club.

“The only main kind of thing you have to worry about when it rains is the moisture of the the water that gets in between the clubface and the ball can kind of shoot it off in different directions. That obviously makes it a little bit tougher to control the shot.” – Day

“But I think I played pretty good today. I mean, for the third round, coming out early, gave myself some opportunities out there to really shoot a low one, but unfortunately didn’t really take them. Even though I wasn’t hitting it all that close, but I was giving myself the right opportunities for the most part and not giving myself downhill putts where you’re playing kind of defense on the putting. I was giving myself uphill putts, and I could be aggressive with it.You know, out there today, you could be aggressive but once again, you can’t overdo it because even if you do short side yourself, with how soft the conditions are, you can’t get up and down if you short side yourself. So you’ve got to be patient, but try and take the birdies when they come and get yourself up the top of the leaderboard.” – Day

On The Final Round

“Now we’ve got one round to go, so there’s still a lot of golf to be played. I think Jimmy got in at 11, so you know, we’re all chasing him. It would be nice to go back to back, but I’m really trying to focus on just to get that one foot in front of the other and go from there.” – Day