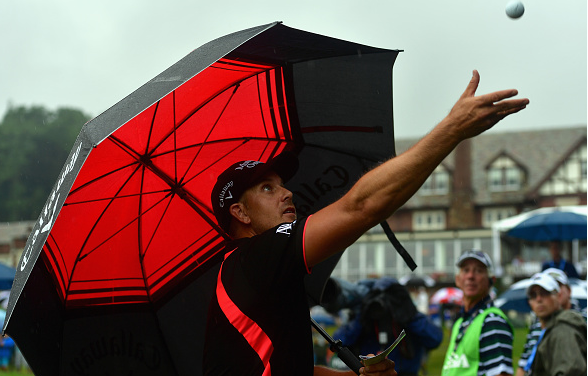 Jimmy Walker leads the PGA Championship at 11-under par heading into the final round at Baltusrol. One shot behind Walker is the defending champ Jason Day (-10). And one behind Day, and two off the lead, are the duo of Brooks Koepka and British Open champ Henrik Stenson, both at 9-under.

Here’s a round up of quotes from the top 4 on the leaderbaord heading into the final round.

“The green speeds were a little bit tough for me. I felt like I could have made probably three or four more putts if I just would have got it to the hole. We didn’t have one mud ball actually, I lied. We had one on 17, but it wasn’t that bad. So we got away with that and not hitting in the rough is big. If we did hit in the rough, we seemed to catch a little downgrain lie, which is nice, and we never really had too much trouble except for probably the one on 18, which is probably the toughest one all week. The back pins are kind of tough with the soft greens and spinning it, because we’ve got almost wedge into a lot of these holes, nothing more than really 9 iron if we’re hitting driver. Just got to be able to control that spin.”

“I think I played pretty good today. I mean, for the third round, coming out early, gave myself some opportunities out there to really shoot a low one, but unfortunately didn’t really take them. Even though I wasn’t hitting it all that close, but I was giving myself the right opportunities for the most part and not giving myself downhill putts where you’re playing kind of defense on the putting. I was giving myself uphill putts, and I could be aggressive with it. You know, out there today, you could be aggressive but once again, you can’t overdo it because even if you do short side yourself, with how soft the conditions are, you can’t get up and down if you short side yourself. So you’ve got to be patient, but try and take the birdies when they come and get yourself up the top of the leaderboard.”

“I tried. I was making a few loose swings here and there on the front nine and finally settled in and made a good swing. I hit that one pretty close and made a birdie and that kind of helped settle things in. Really bummed about the 3 putt on 8. I knew that putt was slow after watching Robert’s and I didn’t really do anything about it. I had a couple of horseshoe lipouts on the front and on the back. I tried to keep making positive swings, lots of good shots, got a couple nice putts to go. Those back pins are tough too. They are hard to get to. I tried to skid one in there on 17 and I came up a little short and it did skid and I just didn’t hit it hard enough.”

“It’s wet but I still think the course is holding up better than I thought. Given how much rain we had yesterday, I thought it was going to be even wetter. A couple fairways, especially 10 and 13, were really wet but the rest was better than I thought it would be. I didn’t bring my best game. My warm up wasn’t the best. I felt a little off on the striking and that kind of continued on the golf course but I still had some spells of good shots and made a couple of birdies there, and at least I finished on a high note with a really nice four there on 18 to set up a birdie. I hope I can pick up some better timing for the fourth round and then keep that putter going, and it could be a good day.”