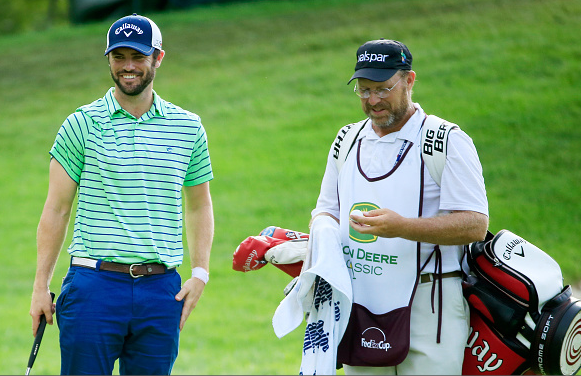 Wesley Bryan, a youtube trick shot sensation, who is making his debut as a PGA Tour member after winning his third web.com event of the season, is not wasting any time in showing that he belongs.

A seven-under 64 during the second round of the John Deere Classic puts him at -12, and gives him a one-stroke lead over Steve Marino. For the second straight day, weather delays prevented many players from finishing their rounds, but among those who have two full rounds in, Bryan has the most reason to be happy.

Wesley Bryan went five-under on his front nine and finished the day with seven birdies to no bogeys, good for a seven-under 64. He leads the field in birdies, leads in both shots gained: approach the green and shots gained: tee to green, and hit 83% of his greens in round 2. He is not hitting long (280 yard average), but he has been accurate.

Luke List, who showed signs of breaking out at the RBC Canadian Open, had a disappointing 73 in the first round, but was much better today, with 8 birdies, compared to just one birdie in round one, on his way to a six-under 65. He is currently at -4, tied for 34th place.

Shawn Stefani, currently on the FedEx Cup bubble at 136th (the top 125 qualify for the playoffs) also was much better in round 2, shooting a four-under 67, three strokes better than his round one, which was not bad, but wasn’t what he needed for the FedEx Cup chase.

Eric Axley does not make many cuts, or many fields for that matter, but he was in good shape after a round one 68. Unfortunately, he went one-over in round 2, putting his weekend in jeopardy. With many still needing to finish their rounds, Axley is on the current cut line at -2. 2008 was the last time Axley had a top-10, or finished in the top 180 of the FedEx Cup standings.

Gillis: Comfortable, but Not Optimistic

Tom Gillis finished in second place at last year’s John Deere, losing on the second playoff hole to tour star Jordan Spieth. It was far and away his best finish last season, as his next best result was a T26. That tournament was also the last time Gillis did anything substantial, as he is in the midst of a season where he has missed five cuts in ten events, and hasn’t finished better than T35 anywhere. Yet, for the second straight year, Gillis is in contention at TPC Deere Run, going 64-68 over the first two rounds, currently good for third place.

After the round, Gillis stated that while he is comfortable at this course, he came in with no expectations. He told an interviewer “I assumed I would probably be leaving Friday night like I’ve been doing all year”. That is not the most positive mindset, but whatever Gillis is doing seems to be working in this tournament.

“ I don’t know, I think it’s just a quiet mind. My mind seems quieter here than it was all year. I don’t know, maybe I didn’t get over what happened last year. Maybe I was subconsciously waiting for this week. Like I said, I had no idea this was going to show up; I feel like I did last year.” ~ Tom Gillis on what is different for him at TPC Deere Run.