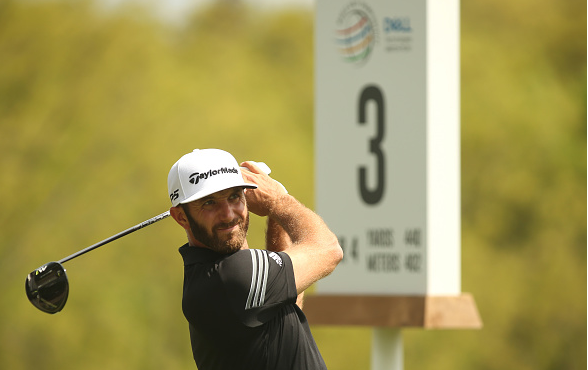 It might be Wednesday, but the PGA Tour is not taking this one off. The first round of the WGC-Dell Technologies Match Play kicked off today in Austin, with 64 golfers playing the first of three pool play matches.

This tournament has been prone to upsets in the past, and today was no different as several big names fell, but the big story was the sudden withdraw of the current king of match-play.

World #3 Jason Day, who has won the WGC-Match Play twice, including last year, will not be going back-to-back, as the 29-year-old Australian withdrew from the tournament.

A very emotional Day explained to the media that his mother has recently been diagnosed with lung cancer, and is set to go into surgery on Friday. Day plans to be with her in the hospital. He made a go of it today, but was too overwhelmed to focus, pulling out after six holes of his match against Pat Perez.

As the world #1, Dustin Johnson is the overall #1 seed in this tournament, and so far he has looked every bit the part. Hot coming in, winning his last two starts, Johnson made easy of former U.S. Open Champion Webb Simpson, winning the first three holes and never looking back.

Simpson did not win a single hole until #11, and by then he was 5-down. Simpson finished T2 at the Waste Management Phoenix Open, losing a playoff, but he has looked better in 2017 so far than he did in 2016.

Brooks Koepka, a member of last September’s winning American Ryder Cup team, has been in a slump as of late, but barely broke a sweat in his first round match today, obliterating Kevin Kisner 6&5.

Koepka started hot, reaching 4-up by #7 and only lost one of the 13 holes he played before Kisner was mathematically eliminated. It’s a promising start for a man who has been terrible in 2017, missing four cuts in six events, and not finishing higher than T42.

Thomas Pieters’ dominant performance for the losing European Ryder Cup team made the 25-year-old Belgian one of the most intriguing players in this tournament.

Pieters never trailed today against Scott Piercy, only losing two of the 16 holes that were played. Pieters has been inconsistent in the short sample size of four 2017 tournaments, combining two missed cuts with two top five finishes.

So far, he looks more like the star we saw at Hazeltine, and less like the one who was atrocious at the Arnold Palmer Invitational last week (+9, missed cut).

Phil Mickelson was tremendous in his first match of the tournament, losing just one hole of the 15 he played against South Korea’s Si Woo Kim.

For a long time, Phil was considered a subpar match play player, but the perception has changed as he has been involved in some thrilling, high-profile head-to-head situations over the past two years.

He failed to reach the round of 16 last year, despite going 2-1-0 in pool play, but looks motivated to do even better this year.

All that success, combined with his career record of 28-12-2 in match play events, Rory was considered by many to be the lock of the first round. Soren Kjeldsen, however, had other ideas. Kjeldsen got off to a great start, winning the first hole, and by #10, he had a two-stroke lead. Rory then got hot, as he often does, winning 11, 12, and 13 to take a one-up lead. That would be last time Rory would be ahead in this match; Kjeldsen won three of the next four to lock up the match, including the clincher, a birdie on the par-3 17th.

Kjeldsen, a 41-year-old from Denmark, has never won on the PGA Tour although he did have two top-10s in majors last year, and while he typically plays sparingly in the US, he has done it more over the last two years with limited success.

Jordan Spieth, a Texas native, is undoubtedly the most popular player in the field, but the extra crowd support did not seem to do much, as Spieth was shockingly dismantled by little-known Hideto Tanihara, a Japan Tour star.

Spieth won just a single hole the entire match, the par-4 14th, after Tanihara hit his drive into the water and carded a double-bogey. In the past decade, Tanihara has just one top 25 on the PGA Tour, a T8 at the 2014 Sony Open. He was #2 on last year’s Japan Tour money list, a tour he was won 14 times on in his career. Spieth was undefeated in pool play last year.

Poor recent form may stop many from referring to this as an “upset”, but Danny Willett has been phenomenal in this tournament in the past, taking a 8-2-1 WGC-Match Play record into the week.

Losing to the lowest ranked-man in the field, South Korea’s K.T. Kim, however, is considered an enormous disappointment for the man who has been in a funk since winning the 2016 Masters.

In 8 PGA events since that breakthrough major victory, Willett has not finished better than T37. Kim is playing in his third WGC-Match Play, getting knocked out in the first round of his last two attempts, both under the pre-2015 format.

“I felt good coming into today, and spoke to Alistar yesterday, and he said, “go and shoot five-under and see if it’s enough; don’t worry about him”, obviously he [Rory] is a pretty spectacular player, so you don’t want to be watching too much, so I knew I had to play well to have any kind of a chance, and therefore, I didn’t look too much at what Rory was doing, and I played really, really well”
–Soren Kjeldsen, who shocked Austin with his round one takedown of Rory McIlroy