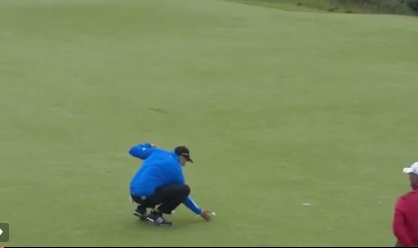 Conditions at Castle Stuart yesterday were not conducive to scoring, with multiple rounds in the high 70’s and 80’s, and most of the players were not happy with it.

“It was a guessing game,” Scotsman Russell Knox said after shooting 72. “We were just pulling a club and hoping for the best. It was borderline too windy. I mean, balls were rolling on the green multiple times during the round, but somehow we kept going. It was hard, though. It was really hard. When a par 5 plays driver, 3-wood, 5-iron and I was nowhere near the hole, pretty tough day.”

With wind blowing steady around 30mph and gusts reaching above 40mph, players felt some of the tees should have been moved up.

“They could have easily moved us up a tee. I disagree with that hole today. But I hit three good shots and three bad putts,” said Knox.

Naturally, the players who shot under par had no complaints. Padraig Harrington fired a 2-under 70 and was “delighted” they didn’t move the tee boxes up.

The wind was so strong one player couldn’t get his ball to stay still when he’d set it down after marking it.

Take a look at the GIF.

And just like at the U.S. Open, the ambiguous rules are under scrutiny. As Andrew Coltart of Sky Sports put it, they’re “clear as mud”.

There’s a good chance the rules officials may have been drinking the Scottish Open-sponsored Ballantine’s scotch whisky when they wrote that one up.