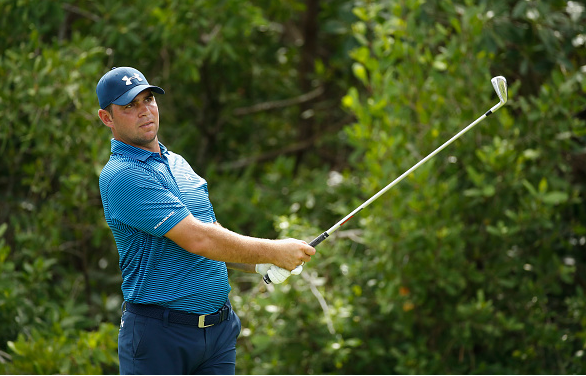 El Camaleon, the host course of this week’s OHL Classic in Mexico, has been a friendly course to the tour’s shorter, but more accurate hitters. That is why it is surprising the the second round leader is one of the biggest bombers on Tour.

Gary Woodland, who has finished in the top 12 on tour in driving distance the past three seasons, shot a bogey-free 65 on Friday, and after two rounds, he leads the OHL Classic at Mayakoba by one over former U.S. Open Champion Webb Simpson and two over 2016 U.S. Open runner-up Scott Piercy.

First round leader Chris Kirk followed up his Thursday 63 with a modest one-under 70, and sits in a tie for fourth, four strokes behind Woodland.

Gary Woodland has made El Camaleon look easy, shooting 64-65, and carding 12 birdies and one eagle in two rounds to just one bogey. Woodland is well known for his long drives, but in this tournament, he has been killing it in greens in regulation.

This was the second straight day that Woodland hit 16 of 18 greens, which is an astounding 88.89%. Birdies on three of the last four holes has Woodland in pole position going into the weekend.

Defending champion Graeme McDowell had a nightmare first round, shooting a four-over 75 in a first row that was largely carved up by the field. Whatever McDowell was missing in round 1, he found in spades in round 2. With a six-under 65 that included birdies on 8 holes, McDowell rallied to make the cut on the number.

Xander Schauffele also came back from a disappointing first round, shooting an 8-under 63 that tied Chris Kirk’s round one for the lowest round of the tournament so far. Schauffle got off to a hot start in his round 2, with six birdies and an eagle in his first 8 holes. He has been struggling with accuracy off the tees, but leads the field in putts per GIR.

Camilo Villegas had one of his best rounds in years on Thursday, shooting a seven-under 64 to get into a tie for second place. On Friday, Villegas looked more like the Villegas who has looked like a shell of his former self over the past five seasons, struggling to a one-over 72.

In round one, Aaron Wise had one of the best two-hole stretches in PGA history with a hole-in-one on the par-3 4th, followed by an eagle-3 on the par 5 fifth hole. It took only one day for the tour to see another two holes like that.

“It was nice to have an off week last week, went out and spent some time with Butch [Harmon]. After the wedding, I got a little rusty I think with the time off, but it was nice to get back in the swing of things. I’m very comfortable with where I’m at right now.”
–Gary Woodland, second round leader