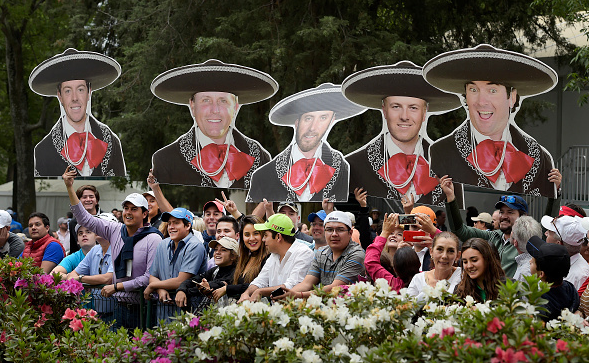 The WGC Mexico Championship is in the books and the newly-minted world #1, Dustin Johnson, took home the inaugural trophy (and lots of U.S. dollars).

The 32-year-old South Carolina native has now won in back to back starts, with wins coming at Riviera and Club de Golf Chapultepec.

Before we move on to the Valspar Championship, let’s take a look at some of the best photos from the Mexico City-based tournament – thanks to the photographers at Getty Images.

Thrill of Victory And…

Justin Thomas loses his club after a tee shot on the seventh hole in the final round.

Jon Rahm reacts to his tee shot on the seventh hole during the final round.

Mariachi Fatheads of Tour players were a fan favorite at the tournament.

Justin Thomas reacts to his putt on the 18th hole green.

Jordan Spieth points at his ball mark after his ball was hit by Sam Brazel’s ball in a greenside bunker on the eighth hole.

Ross Fisher of England reacts to missing a putt on the eighth hole green during the third round.

Fans celebrate after Phil Mickelson made his birdie putt on the fourth hole in round three.

Sergio Garcia blasts a shot out of the bunker on the sixth hole during the second round.

Bubba Watson ponders his next shot during round one.

Rickie Fowler hits a tee shot on the 14th hole during the first round.