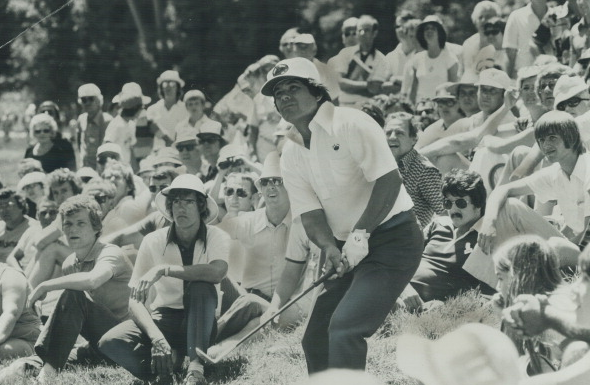 The RBC Canadian Open kicks off this week at Glen Abbey Golf Course on Thursday. Canada’s national championship finds itself sandwiched between the British Open and the WGC-Bridgestone Invitational (with the PGA Championship, scheduled the following week).

Considering that, the field up north includes only two players ranked in the world top 20 – No. 1 Dustin Johnson, and British Open runner-up Matt Kuchar (No. 12).

Here are 10 interesting things to know about the RBC Canadian Open.

The Canadian Open was first played in 1904 and is the fourth oldest running tournament on the PGA Tour, the others being the British Open, the US Open and the BMW Championship (formerly known as the Western Open).

The event is organized by Golf Canada, which used to be known as the Royal Canadian Golf Association.

In 1884, 11 years after its founding, Queen Victoria granted permission to use the “Royal” prefix. In all, Royal Montreal has hosted 10 Canadian Opens.

Even though the Canadian Open isn’t shown much respect these days, the list of winners is quite impressive.
It includes:

Glen Abbey Golf Course has hosted 27 Canadian Opens prior to this year, the most of any of the courses on the rota. Glen Abbey was the first golf course to be solo designed by Jack Nicklaus and opened in 1977.

Located in Oakville, Ontario, Glen Abbey is also the site of the headquarters of Golf Canada. Nicklaus has never won a Canadian Open, but has finished seven times as runner-up, the most in history.

In 1945, Byron Nelson won 11 tournament in a row on the PGA Tour. His 11th win came at the Canadian Open where he beat Herman Barron by four strokes at the Thornhill Golf Club.

Canada has been searching for a home winner for more than 60 years now. Pat Fletcher was the last Canadian to win in 1954. In 2004, Mike Weir came very close to a win at Glen Abbey.

Weir started the final round with a three-stroke lead. He faltered down the stretch, including three bogeys on the back nine but still had a 10-footer on the 18th to win the championship outright. Instead he missed and went into a playoff with Vijay Singh, where he eventually lost on the third-playoff hole.

The modern day Grand Slam in golf is a win at each of the four majors: the British Open, U.S. Open, The Masters, and the PGA Championship. Only five golfers have won all four of these majors in their careers – Jack Nicklaus, Tiger Woods, Gene Sarazen, Ben Hogan, and Gary Player. But only Woods has also won the Canadian Open.

In 1955 (his rookie season), Arnold Palmer won the Canadian Open for his first PGA Tour victory, pocketing $2,400 for his efforts. He also set the tournament scoring record for the most strokes under par at -23, a record which stands till date.

The 2015 Canadian Open served as Jason Day’s historic rise to becoming World No. 1. Trailing David Hearn entering the final round, Day finished his round with birdies on his final three holes to win by one stroke from Bubba Watson.

Following his win at Glen Abbey, Day went on to win the PGA Championship, the Barclays and the BMW Championship.

The three oldest events on the PGA Tour are the British Open, the US Open and the Canadian Open. Two players have won all three of these events in the same year, Lee Trevino in 1971 and Tiger Woods in 2000. Tiger’s win came at Glen Abbey and is most remembered for his approach shot from the bunker on the 72nd hole.

This post was updated on July 24, 2017 to reflect updated content, relative to previewing the 2017 RBC Canadian Open.