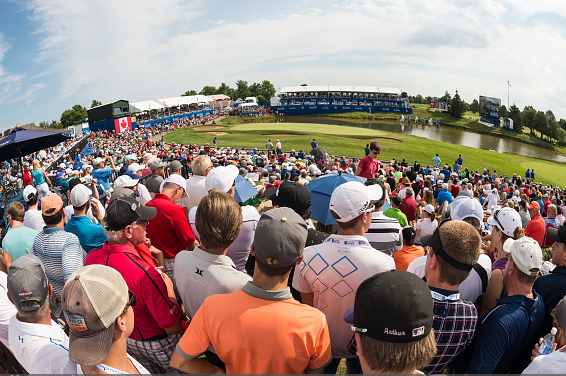 The PGA Tour took a backseat this past week to the marvelous tournament run by The R&A in Scotland. Fans everywhere were treated to first-class entertainment as the world’s newest major winner, Sweden’s Henrik Stenson, nudged past a near-flawless Phil Mickelson in a classic duel that may have been the best in the history of modern golf.

Opposite The Open Championship, the PGA’s Barbasol Championship stayed largely anonymous, briefly catching a few headlines on Friday, when Venezuelan golfer Jhonattan Vegas rode a scintillating six-hole stretch that included four birdies, an eagle, and a hole-in-one to a second-round 60.

This week, the PGA is back in the spotlight as a 156-golfer field will challenge their games in The Great White North at The RBC Canadian Open. For many in that field, Canada’s favorite week of stroke-play competition will serve as a brief respite from the truculent major championship atmosphere before getting back at it next week at the PGA Championship, the fourth and final major of the year. For others, it is all about jockeying to acquire a spot in the upcoming FedEx Cup playoffs. Then there are those who undoubtedly will have the most crowd support: Canadian golfers looking to bring glory to the red and white, and win an event that has not been claimed by a Canadian citizen in 62 years.

At 107 years and counting, the RBC Canadian Open is one of golf’s most prestigious and longest-running traditions, and this year’s host, Glen Abbey Golf Club, is center stage to a timeless event that was long considered the PGA’s fifth major. With 2016 being the most global year of golf since 1904, it is appropriate that one of the few tournaments before The Olympics will be played under the maple leaf flag. So kick up your feet, open a Labatt Blue, and indulge yourself in a Tim Horton’s pastry: it’s going to be a fun week!

The inception of the RBC Canadian Open can be traced all the way back to 1904 at Royal Montreal Golf Club, a tournament won by Englishman John H. Oke, who finished at 156 (+16) and was awarded $60 for the victory. The sites for the Canadian Open were rotated among the elite clubs of Canada as it gained a great reputation in its early years. In those years, a plethora of all-time great golfers, such as Bobby Jones, Tommy Armour, Walter Hagen, and Gene Sarazen were among those who participated in the tournament.

The event drew elite fields, and until it was moved to September in 1988, was even considered to be something of a fifth major. While many great players still make the stop in Canada, the event’s position in the tightly-packed major season makes it generally one of the weaker fields in today’s PGA. This year’s version is sandwiched between The Open Championship and the PGA Championship.

Glen Abbey Golf Course, the host of this year’s tournament, was designed by the legendary Jack Nicklaus, who never won the event, but was runner-up on seven occasions, with the intention of it being the Canadian Open’s permanent home. The tournament has been rotated throughout Canada in more recent decades, but Glen Abbey has hosted 27 times, the most of any site.

Despite being Caanada’s Open, the tournament has been dominated by American golfers. A U.S. golfer has triumphed in 72 times, followed by England and Australia with 8, and Canada with 7.

Current world #1 ranked golfer Jason Day is the defending champion. Day birdied the final three holes to win by one stroke over Bubba Watson, who birdied the final four, and two over Canadian David Hearn. Hearn drew a lot of buzz to the tournament as he was, as the 54-hole leader, in position to become the first Canadian to win the national open since 1954, but he was unable to hold off Day and Watson down the stretch. Day shot in the 60s on all four days, going 68-66-69-68 for a 17-under 271.

A back nine that features par-5s on three of the last six holes has often lead to similarly exciting finishes.

Sweden’s Carl Pettersson shot a third-round 60 (-10) on his way to a one-stroke victory over Dean Wilson at St. Georges in 2010.

With so many large-scale tournaments throughout the summer, and plausible rest weeks being scarce, the fields at the Canadian Open tend to be at least moderately weaker than the average non-major. There was concern that the field could be especially weak this year, with the upcoming Olympics, and being slotted in the one week (also due to the Olympics) between The Open Championship and The PGA Championship.

While this year’s tournament somewhat lacks a quantity of star power, the quality of star power is the best they have had in a while. They were extremely fortunate to get commitments from both world #1 Jason Day, the defending champion, and world #2 Dustin Johnson.

Day is winless since his victory at The Players, and is coming off a disappointing week in Scotland, but his past year has been mostly phenomenal. In just 14 starts this season, Day has three wins and eight top-tens. Since his victory at last year’s Canadian Open, he has won seven times on tour.

Dustin Johnson, the FedEx Cup standings leader who is coming off a T9 at The Open Championship, is one of the hottest athletes in professional sports right now. He recently won the U.S. Open and the WGC-Bridgestone Invitational in back to back weeks. Johnson has made every cut this season, finishing in the top 20 in 14 of 16 tournaments.

We are hitting the final stretch of the PGA Tour season, and each of these weeks become more and more important to those who are sitting outside the top 125 in the FedEx Cup standings.

It is especially important to those who have not secured their card for next season. This field is replete with golfers who fit that definition. It includes recognizable names like Martin Laird (currently 126th), Robert Garrigus (129th), Steve Marino (132nd), Hiroshi Iwata (137th), Will MacKenzie (143rd), and Ken Duke (147), among many others. Brendon DeJonge (155th) of Zimbabwe and Camilo Villegas (146th) of Colombia even withdrew from The Olympics to focus on these late-season events.

This might be a week that the Jordan Spieth’s and Rory McIlroy’s of the golf world can take off and rest, but for a lot of players, these remaining tournaments are extremely important. They have to play with urgency; like their career is on the line.

For Canadian golfers and their passionate fans, this one matters a little bit more than it does for the rest of the field. The Canadian Open is not just a golf tournament; it’s a celebration of Canadian Pride. It brings in large crowds and a festival-like atmosphere.

Unfortunately, the Canadian golf contingency has not given fans much to cheer about, as the last canuck to win the national open was Pat Fletcher back in 1954. There have been a few close calls. In 2004, former Masters champion Mike Weir reached a playoff, but was bested by Fijian Vijay Singh. The win was significant for Vijay because it vaulted him past Tiger Woods to #1 in the world rankings, the first time he had held that position. The win probably would have been even more significant for Weir.

Another close call was last year’s tournament where David Hearn led after 54 holes, and held that lead as late as the 16th hole on Sunday, but was unable to hold off furious charges from Bubba Watson and eventual champion Jason Day. Hearn brought in enormous crowds and drew national attention. Canadian fans are hoping to have the opportunity to rally behind one of their own again very soon.

Here are a few of the Canadian hopefuls:

The man who was two holes away from pulling it off in last year’s tournament is the world’s highest-ranked Canadian (#130). He has made his last six cuts, and finished in the top 28 in five of those.

The formerly heavily-bearded canuck is the world’s 140th ranked golfer. He has three top 10 finishes this year. Henrik Stenson is not the only one who can post a final round 63: DeLaet did it too, although that was at the Barbersol Championship, the opposite-field event to The Open Championship last weekend. The 63 was good for a T8.

Hadwin, one of the best putters on tour, has looked close to breaking out a few times this year. A T11 at The Memorial and a T16 in Phoenix at the Waste Management Open were especially encouraging.

Taylor is quietly in the midst of a solid year. He has made 15 cuts in 22 events, including a T12 at the recent Quicken Loans National.

The 21-year-old amateur duToit made the field by leading the Order of Merit for the Canadian Tour. He has finished in the top-5 in 3 of his past 4 Canadian Tour events. He plays collegiately at Arizona State, and will be making his PGA Tour debut this week.

If one of these men can find a way to win, he will become a bigger name in Canada than Connor McDavid, Josh Donaldson, or Demar Derozan.  Maybe all three put together.

Kuchar, the world’s #17 ranked golfer, is having another Matt Kuchar-like season. He rents out large storage units all over the country to house his vast collection of Top 10 finishes, but the shelf he keeps his major trophies on goes untouched, except for when Mrs. Kuchar needs to water the house plants that currently occupy the space. He has finished in the top 6 of five of his last seven tournaments.

The bright, young PGA Tour rookie declared pro after The Masters, and immediately posted a T4 in his first professional tournament. He also finished T15 at The US Open.

Finau, the long-hitting American (he ranks third on tour in driving distance) won his first tournament earlier this year in Puerto Rico. He is coming off a respectable T18 at The Open Championship. Between that and his T10 at last year’s PGA Championship, Finau is showing an affinity for big events.

A surprise addition to the field, the 21-year-old Englishman posted T7s at both The WGC-HSBC Champions and The Masters. Fitzpatrick plays primarily on the European Tour, where he won the Nordea Masters back in May. Americans interested in scouting players who will likely be on a lot of European Ryder Cup teams should watch Fitzpatrick especially close.

The 46-year old South African Hall of Famer has missed five of his past six cuts, but the one he did make was a solo-fifth at the Quicken Loans National. With his experience, the Big Easy can never be ruled out. He missed the cut at this tournament last year, but posted a T12 in 2014.

Furyk has missed most of the season to recover from wrist surgery. Since his return, his only significant result was a T2 at The U.S. Open. He needs a few good finishes to ensure a spot in the FedEx Cup playoffs, which he won in 2010. His recent form at the Canadian Open has been tremendous. He has finished 5, 2, T9 the past three years.