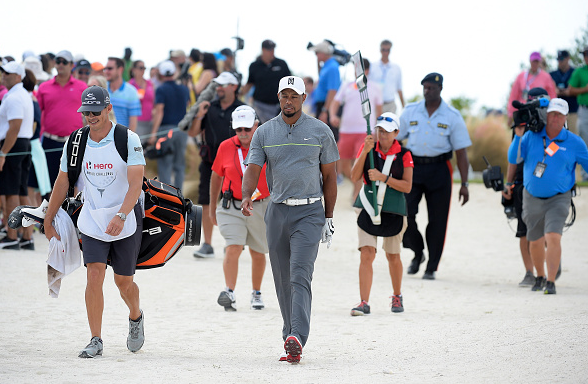 The final round of the Hero World Challenge is on tap in a few hours, and it is setting up to be a repeat of the WGC-HSBC – where Hideki Matsuyama lapped a (loaded) field.

The Japanese superstar holds an incredible 7-stroke lead heading into the final round against a field that includes six of the Top-10 players in the world, and ten of 12 U.S. Ryder Cup team members. Not to mention Tiger Woods.

But before we move on to the final round, let’s take a look at the 10 best photos of day three from the photographers at Getty Images.

Tiger finishes a tee shot on the par-3 12th hole.

Dustin Johnson lines up a shot on the 11th hole.

Rickie Fowler follows through after a tee shot on the 12th hole.

Matt Kuchar waves to the gallery.

Tiger hits his second shot on the 11th hole. Rickie Fowler looks on.

Hideki Matsuyama hits a bunker shot on the 3rd hole.

Henrik Stenson lines up a putt on the ninth green.

Tiger walks along the sandy area of the eight hole.

Rickie Fowler talks to his ball on the second hole.

Dustin Johnson plays from trouble along the 18th hole.