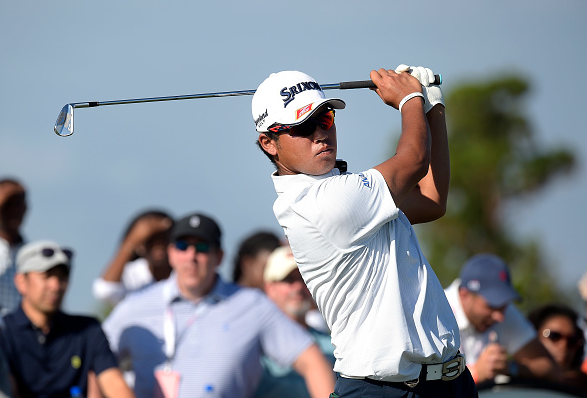 It ended up not being the runaway that it looked like it would be after round 3, but Hideki Matsuyama was able to hold off a charge from Henrik Stenson and win the Hero World Challenge by two strokes.

Unquestionably the hottest golfer on the planet right now, the win in the Bahamas is his fourth victory in his last five events worldwide. His only non-victory was a runner-up finish in Malaysia.

The final tally shows Matsuyama at -18 after his Sunday 73 and just a few strokes ahead of Stenson, but he started with a seven-stroke lead, and it never really felt like he was on the verge of losing his advantage.

All eyes on Sunday again were on Tiger Woods, who made his long-waited return to competitive action, but his final round was a struggle, as a four-over 76 dropped him to 15th (out of 17 golfers) on the leaderboard.

Early on, it was looking like another day at the office for the 24-year-old Matsuyama, who over the past few months has become immune to bad shots. He birdied holes 3 and 5 to get to -21 for the tournament and destroy whatever miniscule hopes anyone else in the field had of winning.

However, on the 10th hole, Hideki looked as mortal as he has all week, carding a double-bogey, which seemed to paralyze his momentum. He played the rest of the round one-over, with a bogey on 14 and pars for everything else. It was not likely the finish he envisioned, but it got the job done.

What It Means For Matsuyama

The Hero World Challenge is an unofficial event, so Hideki doesn’t reap FedEx cup points for this one, nor did he get (or need) any of the copious exemptions that come with a PGA Tour victory. However, it was still a million dollar payday for the Japanese superstar, and it surely put out a notice to the rest of the tour.

Young players like Jordan Spieth, Patrick Reed, and Rickie Fowler get considerable press, but Hideki appears on the way to being considered just as good. He will be a favorite to win his first major in 2017.

With many questions coming in, Tiger’s tournament was a resounding success through three rounds, highlighted by his second round bogey-free 65.

Sunday was a terrible round on the scorecard: a four-over 76 dropped him from 10th to 15th. He was all over in his final round, with a double-bogey on the par-5 6th hole followed up by three straight birdies to finish the front nine.

He then started his back nine bogey-double-bogey before finding two more birdies on 14 and 15 and then another double-bogey on 18, his sixth of the week. He obviously would have liked to have finished better, but after missing nearly 16 months of action, simply finishing the tournament healthy is a great accomplishment.

What It Means For Tiger

It means that Tiger is not done. He was madly inconsistent all week, leading the field in birdies, but also leading in double bogeys, but at the very least, he looked like he belonged.

Tiger now goes on another break (as does the entire PGA Tour), gets to build off a successful week, and formulate a plan for 2017.

It is unknown if Tiger is planning another abbreviated schedule like he does most years, or if he will enter more tournaments to get back into golf shape. Regardless, at least he is playing again.