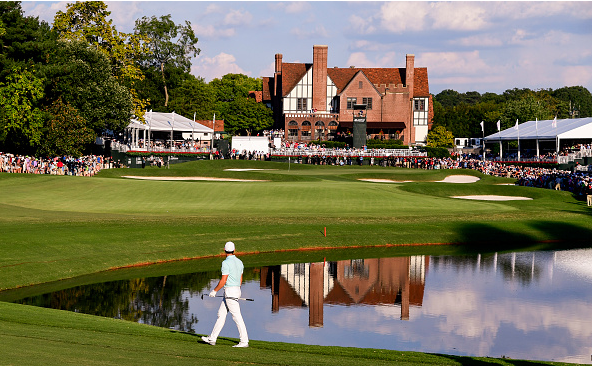 Jordan Spieth or Justin Thomas? How about Marc Leishman? Or Jon Rahm?

As usual, there’s a mix of favorites and Cinderella stories holding the top five spots on the FedExCup points chart as the chase for the season-ending $10 million top bonus comes to its final stop at Atlanta’s historic East Lake Golf Club. 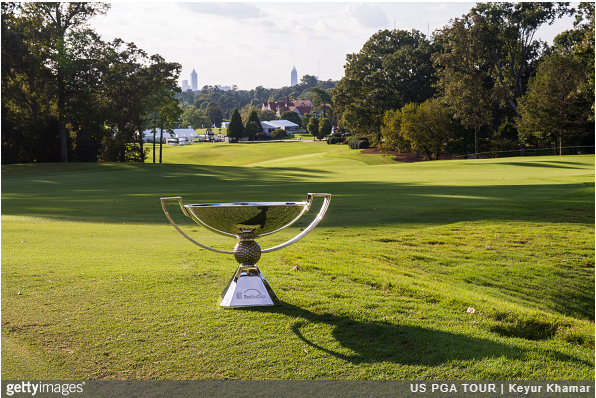 Put Spieth and Thomas in the first category, along with Dustin Johnson. (Hey, can’t forget about the world No.1.) As a refresher, if any of the aforementioned top five win at East Lake, the FedExCup is his.

Favorites, though, don’t always walk away with the biggest prize. Ask Jason Day, who won two of the first three playoff stops two years ago only to see Spieth snatch the prize at the end. Ditto for Rory McIlroy, whose two playoff wins in 2012 were stymied by a well-timed Brandt Snedeker.

Fire up the algorithms. Here’s a FedExCup finale edition of the week’s top storylines.

1. PLAYER OF THE YEAR

If anyone other than Spieth wins at East Lake, go ahead and etch Thomas’ name on the various Player of the Year awards. Five victories will be two more than anyone else, and that includes a major at the PGA Championship. 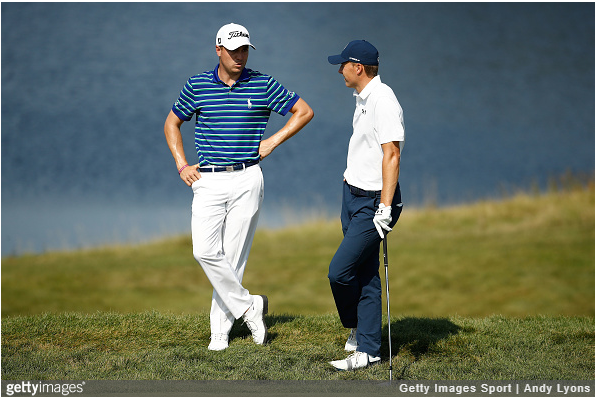 If Spieth has another two-trophy Sunday as he did two years ago, though, the topic is at least up for discussion.

Victory at East Lake would give Spieth four in 2017, including a major when he captured the Open Championship at Royal Birkdale. The question lies in how much weight the FedExCup would carry in voters’ minds.

The FedExCup was created to reward all-season excellence, though its playoff structure often leaves the top regular-season competitor out in the cold. Even so, it’s worth noting that Spieth – not Thomas – comes to East Lake at No.1 in points.

That’s because Spieth has three runner-up finishes – two coming in playoff events – and two more third-place finishes. Thomas, by comparison, has only two top-5 finishes outside his wins. A Spieth victory also likely would give him the Vardon Trophy for top adjusted scoring average.

It was just three years ago that Billy Horschel became the most unlikely winner of the FedExCup, sitting 82nd in points after the opener before a 2-1-1 finish left him doing the Gator Chomp on Bobby Jones’ boyhood grounds. 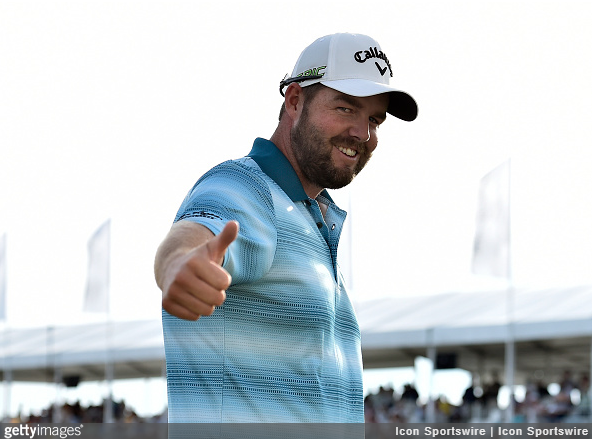 Leishman missed the cut at The Northern Trust, found his groove to place third in Boston and ran away with the BMW Championship at Conway Farms.

“I had my sights set high for the FedExCup,” Leishman said after completing a wire-to-wire victory. “It’s nice to have the trophies there and be in that top five. Really, if I have another good week next week, who knows what might happen.”

To be fair, the Aussie entered the FedExCup postseason at No.14 and dropped only to 20th after missing the cut at Glen Oaks Club. He won the Arnold Palmer Invitational back in March and had four other top-10 finishes in the regular season.

Leishman also has risen to a career-best No.15 in the world rankings. He began the year at No.56, then hovered in the 30s all summer after winning at Bay Hill.

Each of the past seven FedExCup champions have done so by winning at East Lake, lending credence to the points reset the PGA Tour instituted in 2009, after Vijay Singh had all but locked up the 2008 crown by winning the first two playoff stops. 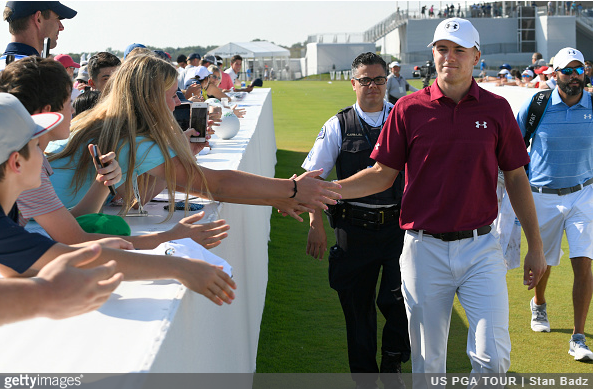 That 2009 finale was the last time the trophies at East Lake had been split – Phil Mickelson won the Tour Championship, but Tiger Woods walked away with the bigger prize.

It almost happened again last year, when Ryan Moore faced an 8-foot birdie try at No.18 that would have won the tournament and given Dustin Johnson the FedExCup title. That putt grazed the hole, though, and McIlroy captured a three-man playoff to take the twin trophies.

Four men have captured the FedExCup crown without winning one of the previous three playoff events, including Spieth two years ago. The others came in consecutive years: Jim Furyk (2010), Bill Haas (2011) and Snedeker (2012).

In Spieth’s case, two major titles kept him second in points heading to East Lake, where he cruised to a four-shot win.

McIlroy won’t be at East Lake to defend last year’s title, left on the outside of the invitation list after a share of 58th at Conway Farms dropped him to No.58 in the FedExCup standings. 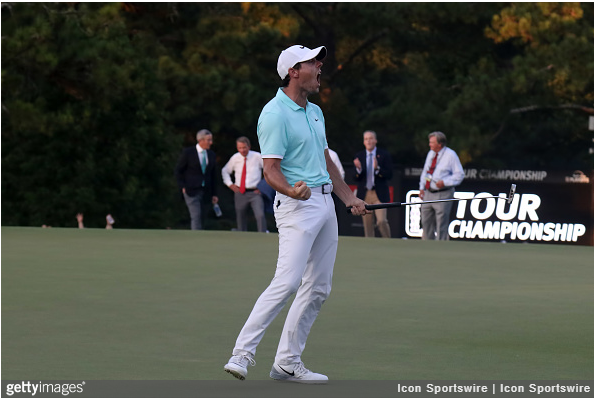 That makes him the eighth of 10 FedExCup champions who have not made it back to the Tour Championship the following year, a curse that has befallen Woods, Singh, Jim Furyk and Henrik Stenson among others before him.

The only men to avoid the hex have been Spieth, who finished ninth last year, and Snedeker in 2013 (12th).

Side note: Of all the prior FedExCup champions, Spieth is the only one back at East Lake this week.

Rahm technically isn’t a rookie, taking up Special Temporary membership last summer after placing third at the Quicken Loans National and second at the RBC Canadian Open. But in his first FedExCup playoffs, he’s already in rarified air. 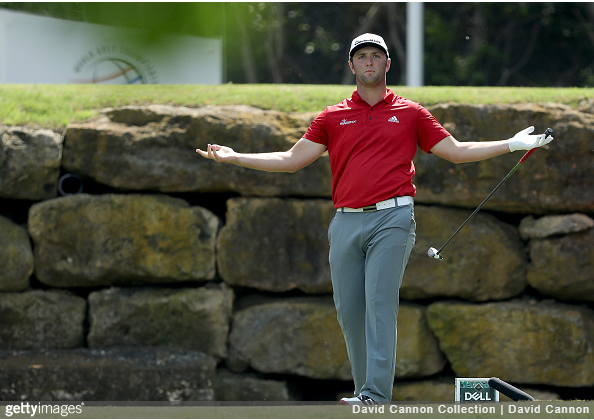 With Sunday’s share of fifth at Conway Farms, the young Spaniard became only the second man to record top-5 finishes in any season’s first three playoff events. Adam Scott set the bar last year when he went 4-4-4.

Scott, of course, has been around for more than a decade. These were the first three FedExCup playoff starts of Rahm’s career.

“I’m confident the last two weeks,” said Rahm, who was third at The Northern Trust and fourth in Boston. “I’m visualizing the shots, hitting them a lot close to the way I see it.”

Rahm has seen his way into the top five, so he needs no help winning the FedExCup if he prevails at East Lake.

In a year of high-profile caddie changes – see McIlroy and Phil Mickelson – Day’s switch paid off with the most immediate results.

The Aussie, with longtime friend Luke Reardon on his bag, placed fourth at the BMW Championship – including a Friday hole-in-one and a Sunday 69 that took him firmly off the bubble for East Lake. 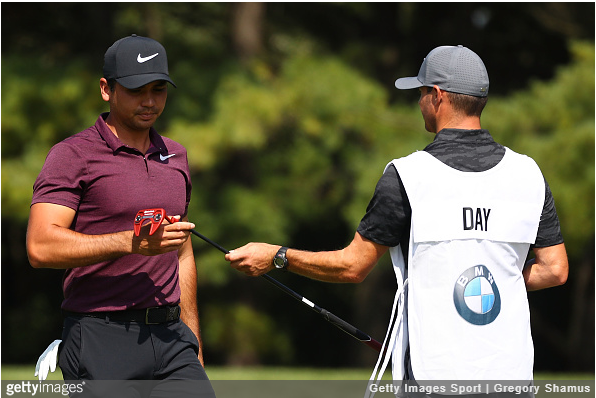 “It’s a good solid week,” Day told reporters. “Actually, halfway through my season I didn’t even think I was going to get (to) the Tour Championship. Very happy about that.”

Day already had been rounding into form before Conway Farms, with top-10s at both the PGA Championship and The Northern Trust. Still, he decided the time was ripe to relieve Colin Swatton of his bag.

Swatton will remain his coach and mentor, with a relationship going back to Day’s youth in Australia. Day said preserving that relationship – he’d been taking out his frustrations on Swatton – prompted the change.

A week ago, there was a chance no PGA Tour rookie would punch his ticket to East Lake. Six were still in the playoffs, but all were below the cut line to advance from Conway Farms.

Two wound up playing their way in – as both Xander Schauffele and Patrick Cantlay used some high drama to earn their Tour Championship berths. 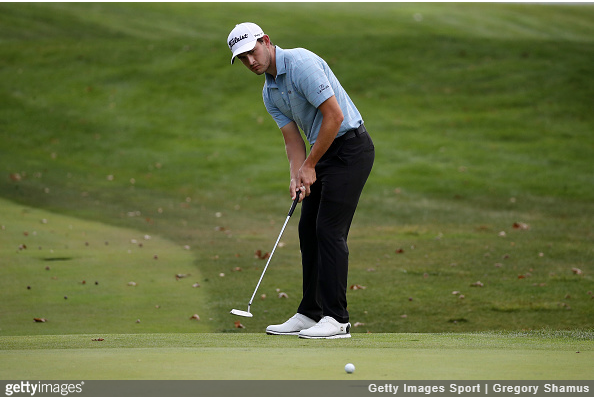 Schauffele stood 2-over through Sunday’s first 12 holes, before a closing tear that featured four birdies and an eagle. The Greenbrier Classic champ drove the green at the par-4 15th and drained a 27-foot putt.

Cantlay hovered near the East Lake cut all day, dropping below with a bogey at No.16 and needing a birdie at Conway Farms’ par-5 finishing hole. With a 10 ½-foot putt to decide things, he knocked it in.

It’s the second straight year that two rookies have booked passage to East Lake. The best FedExCup finish by a rookie is held by Spieth, seventh in 2013.

The California native had fallen short in six previous trips to the BMW Championship, never really sniffing the possibility with a best finish of 44th in the FedExCup standings. 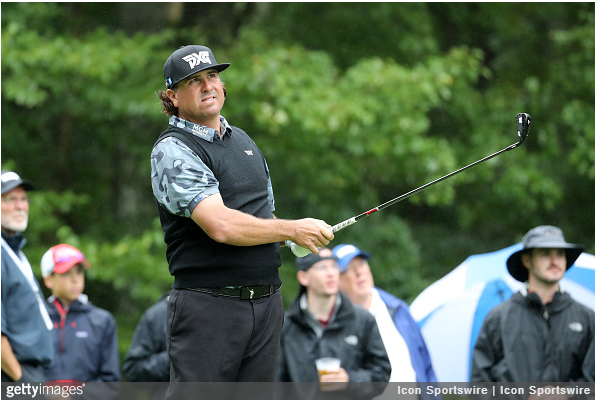 That was 2007, the first year of the newfangled points race. Twelve months ago, he was rehabbing from shoulder surgery that cut short his 2015-16 season long before the playoffs.

In his first start on a medical extension, he tied for seventh in Las Vegas. He followed that up by winning the OHL Classic at Mayakoba – his first victory in more than 7 ½ years. He began 2017 with two top-10s in his first four starts and has stayed in the top 15 in points all year.

How successful was the PGA Tour’s decision to flip the order of East Lake’s nines for last year’s Tour Championship? So much that East Lake’s hierarchy decided to follow its lead. 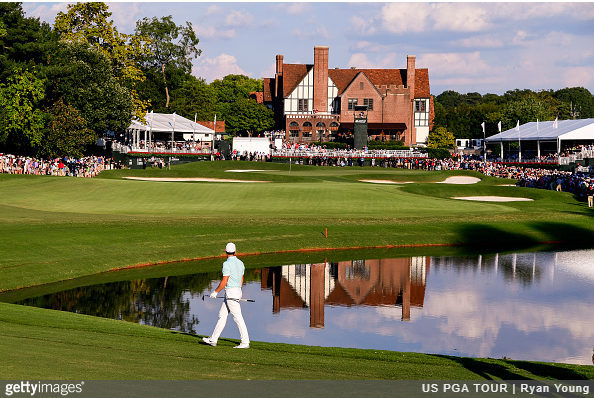 Demoted is the par-3 finishing hole that rarely provided drama on the final day. It’s been reclassified as No.9. Now players face a five-hole closing stretch with the potential for big moves either way.

Last year, McIlroy’s eagle at No.16 set the stage for him to gain the three-man playoff with Moore and Kevin Chappell. With two holes to play, Chappell saw a two-shot lead evaporate with a bogey at No.17 while McIlroy and Moore birdied ahead. 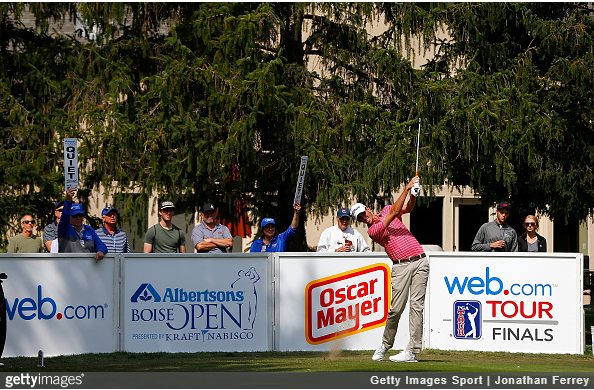 Though other parts of the Jacksonville area experienced record flooding, ABCC never really found itself in danger. It also was one of the first area courses to re-open after Hurricane Matthew skirted the coast last October.

The Finals return to Ohio for the third leg this week at the DAP Championship outside Cleveland. Chesson Hadley won last week’s event in Boise, booking a PGA Tour return along with runner-up Ted Potter Jr.