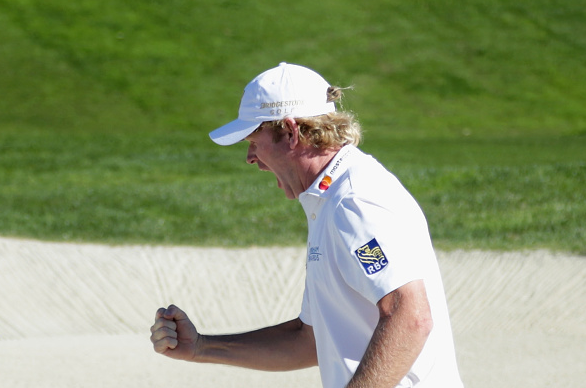 Jon Rahm fired a lights-out 7-under 65 on Sunday, highlighted by a 60-foot eagle putt on the 18th and final hole, to win his first PGA Tour title.

The 22-year-old finished the tournament at 13-under-par – three strokes clear of Charles Howell III and Cheng Tsung Pan, who both tied for second at 10-under.

A group of five players tied for 4th place at -9, including 36-hole leader Justin Rose, and 54-hole leader Patrick Rodgers.

With the win, Rahm pockets 500 FedEx Cup points, which moves him all the way up to the No. 6 spot in the FedEx Cup race.

To close out coverage from Torrey Pines, let’s recap the three best shots from Sunday’s final round.

Charles Howell III arrived at the 614-yard par-5 13th at 7-under-par, and two-strokes back of leader (at the time) Keegan Bradley.

After this long bomb putt dropped, the former Oklahoma State star walked off the green at -9, and atop the leaderboard.

Brandt Snedeker under-performed on Sunday, to say the least. The two-time winner at the Farmers was tied for the 54-hole lead, and many expected he’d pull away on the final day. But the Nashville native started off, on hole 1, with a bogey and never seemed to get anything going – finishing at 1-over for the round, and tied for 9th.

One bright spot for Snedeker on Sunday, however, was on the par-3 11th hole. After landing his tee shot in the green-side bunker, Snedeker proceeded to hole it out for a birdie to move to 9-under par.

This shot by Jon Rahm has been analysed and re-published so many times in the last 12 hours, that there’s not much to add. But here’s a quick recap. Rahm arrived at the par-5 18th hole with a one-shot lead, at 11-under-par. His approach to the green went a bit long, leaving him with a downhill 60-footer for eagle. The pre-shot analysis on TV had the rookie laying it up for a tap-in type birdie, and a 2-shot lead.

Well, the rest is history!

It doesn't get better than this. #QuickHits pic.twitter.com/pTmEjJLj7N